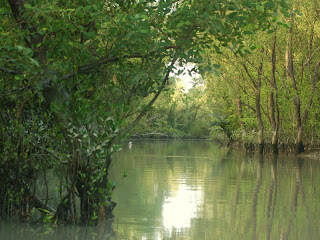 Mangrove forest in  Bangladesh.
We at Mangrove Action Project have been working for almost 20 years to promote the ecological value of mangrove forest wetlands. It has been an uphill battle to counter the negative image of the once mislabeled "muddy, mosquito infested wastelands." Governments finally began recognizing their importance and passed laws to protect the mangroves, but these laws were rarely enforced, so more and more mangroves were lost to shrimp farms, tourist development, golf courses, oil exploitation, urban and agricultural expansion and a multitude of other unsustainable, short-sighted development pressures. The rampant turning of millions of hectares of valuable wetlands to wastelands has had and is having tragic, long-term consequences.
Mangrove forests are vital for healthy coastal ecosystems in many regions of the world. They support an immense variety of sea life in intricate food webs associated directly with mangroves themselves. They are refuge for juvenile fish, crabs, shrimp and mollusks. Mangroves are also prime nesting and feeding sites for hundreds of migratory bird species. Additionally manatees, crab eating monkeys, Royal Bengal tigers, fishing cats, migratory birds, sea turtles and Mud Skippers utilize and depend upon mangrove wetlands.
More recently, it has come to the attention of mangrove ecologists that healthy mangrove forests play an important role in carbon sequestration—these unique ecosystems and corresponding wetlands account for nearly a third of the world’s terrestrial carbon stores (Ramsar Secretariat 2002). Dr. Ong Jin Eong of Malaysia has in his extensive research found that mangroves sequester 50 times more carbon in their soils than terrestrial tropical forests. Dr. Ong was one of the first to postulate that mangroves are key links in combating climate change.
Intact mangroves also protect coral reefs and sea grass beds from landward siltation and pollution runoff, while forming a natural coastal protection shield against floods, storms or other natural disasters such as the Indian Ocean tsunami of 2004 and Hurricane Mitch of 1998. Beyond these irreplaceable ecosystem services, mangroves provide important socio-economic benefits to coastal communities, providing bountiful seafood, fruits, fuel wood, shelter, medicines and tannins. 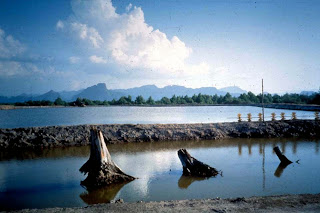 Pond with mangrove stumps.
In spite of those important functions, more than 50% of the global mangrove forests have been destroyed over the last 100 years, most of this loss occurring in the last 30 years, mainly caused by human development. In addition, mangroves are vulnerable to negative effects caused by climate change such as rising sea levels, higher temperatures and natural disasters. Conservation and restoration programs in those areas degraded or ruined by unsustainable development are urgently needed. Because mangroves play such an important role in sequestering carbon, this approach will contribute to climate change mitigation through avoided destruction and restoration of ecosystems. The improvement of mangrove ecosystems will also enhance its function as a natural water treatment system and spawning grounds for fish, improving health and fishing possibilities, further benefiting marginalized local communities.
However, very few organisations so far have dealt effectively with mangrove restoration and relatively few experiences exist on successful, long-term mangrove rehabilitation. These failures in effective mangrove restoration are worrisome in the light of the millions of dollars and thousands of man-hours spent at the task, not to mention the millions of mangrove seedlings unsuccessfully planted all in neat rows in the wrong places with the wrong species and at the wrong time.
Failures are bound to happen, partly because adaptation to climate change and increased disaster risk through utilization of natural vegetative protection shields such as mangroves is a relatively new concept, relying on ecosystem services instead of engineering technologies and hard infrastructures to reduce the severity of disasters. Nevertheless, we need to be more proactive in learning from these obvious failures, and not repeat them ourselves or encourage others to do the same. In light of the continuation of these “traditional” methods of hand planting mangrove propagules or seedlings, it seems most restoration practitioners are reluctant to implement changes in their overall strategy involving restoration.
MAP has responding to this apparent impasse by promoting a more innovative approach that we believe is both more cost effective and successful in restoring mangrove wetlands by paying special attention to coastal hydrology and those disturbances that have caused the problems of mangrove loss in the first place. This technique is called Ecological Mangrove Restoration (EMR), which was developed over the years by MAP’s chief technical advisor, Robin Lewis, who demonstrated that EMR ensures restoration of more biodiverse, healthy mangrove wetlands. Successful approaches can then be replicated to restore mangroves in other communities, regions or countries. 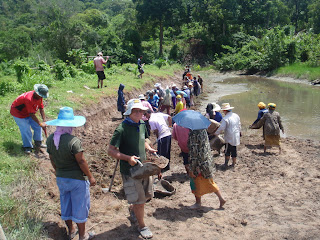 Demonstrating Ecological Mangrove Restoration at Ban Talae Nok Village located on Thailand's North Andaman Coast in Ranong province.
Ecological Mangrove Restoration Defined
Ecological Mangrove Restoration has been defined as “the process of repairing damage caused by humans to the diversity and dynamics of indigenous ecosystems” (Jackson et al. 1995) Ecological Mangrove Restoration is a holistic approach to mangrove restoration that also includes a view of the proposed plant and animal community to be restored as part of a larger ecosystem with other ecological communities that also have functions to be protected or restored. EMR aims at the restoration of certain ecosystem traits and the replication of natural functions. It has been reported that mangrove forests around the world can self-repair or successfully undergo secondary succession over periods of 15-30 years if: 1) the normal tidal hydrology is not disrupted and 2) the availability of waterborne seeds or seedlings (propagules) of mangroves from adjacent stands is not disrupted or blocked (Watson 1928, Lewis 1982, Cintron-Molero 1992).
Because mangrove forests may recover without active restoration efforts, it has been recommended that restoration planning should first look at the potential existence of stresses such as blocked tidal inundation that might prevent secondary succession from occurring, and plan on removing that stress before attempting restoration (Hamilton and Snedaker 1985, Cintron-Molero 1992). The second step is to determine by observation if natural seedling recruitment is occurring once the stress has been removed. Only if natural recovery is not occurring should the third step of considering assisting natural recovery through planting be considered.
Unfortunately, many mangrove restoration projects move immediately into hand planting of mangrove seedlings without determining why natural recovery has not occurred. There may even be a large capital investment in growing mangrove seedlings in a nursery before stress factors are assessed. This too often results in major failures of planting efforts. 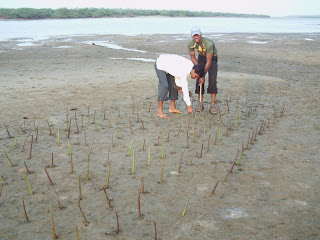 Planting mangrove propagules.
Six Steps To Successful Mangrove Forest Restoration
In collaboration with communities, organizations and local government, MAP will work to:
Today, MAP is working with local communities and partnering with grassroots NGOs to conserve and restore mangroves, promoting the Ecological Mangrove Restoration (EMR) approach as the most effective, long-term approach to mangrove restoration. We are trying to discourage the popular but ineffective way of hand planting mangrove seedlings or propagules, usually with one species- the red mangrove or rhizophora- that is still the most popular approach, which unfortunately is establishing low-biodiversity monocultures or plantations, instead of healthy, biodiverse mangrove wetlands.
MAP is currently seeking support for our innovative and collaborative Ecological Mangrove Restoration and Training (EMR) workshops and follow-up restoration and monitoring program. This program is slated to take place in both Latin America and Asia over a three to five year timeframe and will train and engage mangrove forest communities in restoring and managing coastal mangrove forest ecosystems for the long-term benefits of the participant communities. Our first EMR Training Workshop is slated for July 6, 2011 in Jiquilisaco Bay in El Salvador. Jiquilisco is part of the “Mangrove Corridor” which runs along the coastlines of El Salvador, Nicaragua and Honduras. So the potential outreach from the workshop in El Salvador could reach much further along this entire Corridor. 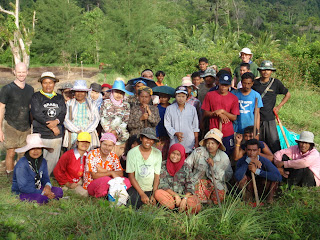 Ban Talae Nok's Ecological Mangrove Restoration team.
Involving the Local Community
To involve the communities from the start of the project is vital to the program’s success. The community will need to develop a management plan to deal with the cause(s) of mangrove destruction in the first place. The destruction could be due to over exploitation for fuel wood, illegal cutting and/or development encroachment such as shrimp farming, grazing by livestock or other conflicting uses. Often it will take time to develop and implement a workable solution, while other times a viable strategy may not be found, which will prevent moving ahead with mangrove restoration plans. Once the management plan is successfully being implemented, mangrove restoration can move forward in parallel.
Next, the EMR approach will be introduced to local community members interested in serving as future monitors and resource managers at the sites selected. This presentation could be quite effective in encouraging the local community to get involved, which is one of our main points of interest to help build the capacity of local communities to better manage and conserve their natural resource base. Strong community stewardship will ensure a central stakeholder role in future mangrove management decision-making processes. A program of monitoring and evaluation of restored sites by local community members is built into the EMR process with a 3-5 year monitoring plan to ensure success of the endeavor.
Towards Reversing the Losses
We must first address the need to halt further losses of our marine coastal wetland areas. Their intrinsic value is constantly increasing from what we once naively assumed. All of our past economic valuations have fallen far short of the reality, mainly because of lack of knowledge as to the amazing ecosystems we have for too long taken for granted. Those muddy swamps are possibly now our ultimate remedy to the planetary sickness caused by rampant human folly.
Now is the time to take these issues forward the planned for a discussing climate change in what could be a last attempt to curb our civilization's penchant for unlimited and unreasonable growth.
Web Sites and Literature Cited
Lewis, RR. III. 2005. Ecological engineering for successful management and restoration of mangrove forests. Ecological Engineering 24(4 SI): 403-418. (Available at www.mangroverestoration.com in both English and Spanish)
Lewis, RR. III. 2009. Methods and criteria for successful mangrove forest restoration. Chapter 28., pages 787-800 in GME Perillo, E Wolanski, DR Cahoon, and MM Brinson (eds.)
Coastal Wetlands: An Integrated Ecosystem Approach. Elsevier Press.
Lewis, RR, B. Brown, A. Quarto, J. Enright, E. Corets, J. Primavera, T Ravishankar, O Stanley and R Djamaluddin. 2006. Five steps to successful ecological restoration of mangroves. Mangrove Action Project/Yayasan Akar Rumput Laut. Yogyakarta, Indonesia. 64 p.
Ramsar Secretariat (2002): Climate change and wetlands: impacts, adaptation and mitigation. COP8, Information Paper DOC 11.
Samson, MS., and RN Rollon. 2008. Growth performance of planted mangroves in the Philippines: revisiting forest management strategies. Ambio 37:234-240.
UNEP/GRID-Arendal/ Food and Agriculture Organization/UNESCO, Blue Carbon: the role of healthy oceans in binding carbon- a Rapid Response Assessment report compiled, 2010
=========
For the Future with Mangroves,
Mangrove Action Project
PO Box 1854
Port Angeles, WA 98362-0279
USA (360) 452-5866
mangroveap@olympus.net
www.mangroveactionproject.org
_____________________________
Guest blog (including images) by Mangroves for the Future (many thanks Alfredo!)
Posted by Steven J Lutz at 2:27 PM