Need for Blue Carbon at Rio+20

"Protocols for the Measurement, Monitoring and Reporting of Structure, Biomass, and Carbon Stocks in Mangrove Forests" provides valuable information on how to monitor, measure and report mangrove structure, biomass and carbon stocks but also highlights the alarming rate of loss of mangrove forests face.

The authors note the importance of Blue Carbon ecosystems such as mangrove forests, seagrass and saltmarshes, the critical threats that they face, and the need to include them in "impending discussion within the Rio+20 summit." 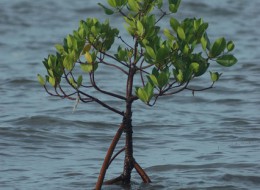 Mangrove shoots on the beach in Pejarakan Village, Indonesia.  Photo by Aulia Erlangga for CIFOR
BOGOR, Indonesia (14 March, 2012) - “Oceans” will be one of the key issues under discussion at Rio+20 with the aim to ensure sustainable ocean development and the protection of marine resources, yet mangroves – whose carbon sequestering ability and raft of ocean ecosystem services are being lost at an “alarming rate”  –  are not mentioned at all in the summit’s zero draft agenda.
“With the loss of mangroves, we would lose many important ecosystem services. The impact on local communities and adjacent ecosystems would be catastrophic,” said Boone Kauffman, scientist with the Center for International Forestry Research and lead author of CIFOR’s recent publication: Protocols for the measurement, monitoring and reporting of structure, biomass and carbon stocks in mangrove forests.
“Given their unique values and the dramatic threats to their continued existence both due to climate change as well as ongoing degradation, there is an urgent need for governments at Rio+20 to acknowledge the importance of mangroves and develop better policies to ensure their protection.”
Back in the laboratory, CIFOR researchers are analysing the carbon in thousands of mangrove soil samples from across South-East Asia and Latin America. The methods they are developing to measure carbon will inform the Intergovernmental Panel on Climate Change’s (IPCC) revision of guidelines for greenhouse gas inventories in wetlands – a crucial development to better include mangroves and other valuable wetlands in carbon financing programs such as Reducing Emissions from Deforestation and Forest Degradation (REDD+).
“Mangroves store up to three to four times more carbon than most tropical forests,” said Kauffman.
“We have developed accurate and efficient methodologies to quantify carbon stocks because of the potential importance of mangroves not only in international climate change treaties such as REDD+, but also for sustainable development such as the impending discussion within the Rio+20 summit.”
Asia supports the world’s largest mangrove areas, originally extending more than 6.8 million hectares and representing 34– 42 percent of the world’s total. Indonesia holds almost 23 percent of the world’s mangroves followed by Africa at 20 percent, North and Central America, 15 percent, Oceania, 12 percent, and South America at 11 percent.
Mangroves, as well as tidal marshes and sea-grass meadows, remove carbon from the atmosphere and lock it into the soil, where it can stay for millennia. Unlike terrestrial forests, these marine ecosystems are continuously building carbon pools, storing huge amounts of “blue carbon” in their organic-rich sediments.
When mangroves are degraded due to drainage or conversion for agriculture or aquaculture, they emit large and continuous amounts of greenhouses gases to the atmosphere. Rates of mangrove deforestation and conversion to other land use types are among the highest of all tropical forests with land conversion contributing to the loss of 35 percent of the world’s mangroves between 1980 and 2000.
“Mangroves are being destroyed at an alarming rate and this needs to stop,” said Daniel Murdiyarso, CIFOR Senior Scientist. “There is a lack of awareness of the full implications of mangrove loss for humankind.”
Kauffman believes surveys that quantify forest composition, carbon pools and the large emissions that result from mangrove conversion will provide valuable information in the efforts to protect mangroves.
“This information could be used to preserve mangroves’ vital ecosystem services, such as providing local communities with livelihoods related to fish and shell fish resources, wood and non-timber forest products, ecotourism, sources of biodiversity, and important sources of nutrients and energy for adjacent coral reefs as well as protecting coastal zones  from natural disasters, and functioning as remarkably large carbon sinks.”
Such surveys will certainly be required to monitor carbon stocks of mangroves to enable participation in regulated climate change mitigation and carbon market activities such as REDD+. This publication addresses these needs specific for mangrove ecosystems.
“Given the differences of composition, ecology and structure of mangroves compared to upland forest types, this manual was necessary to compose,” Kauffman added.
REDD+ helps to reduce global greenhouse gases by compensating countries for avoiding deforestation or forest degradation. Its broader framework, however, could provide compensation for aspects such as forest enhancement and carbon stocks.
Managing coastal ecosystems for the range of services they provide can complement existing approaches to nature-based solutions to reduce the effects of climate change. Such investments have the potential to link to REDD+ and other carbon financing mechanisms, provided that protocols on accounting, verification and reporting of net carbon uptake can be agreed.
The carbon measurement methods employed by the scientists correlate with Tier 3, the highest of the IPCC’s Tier system, which reflects the degrees of accuracy of carbon stock assessment for REDD+ program participation.
Tier 1 uses simplified assumptions and can have an error range of approximately 50 percent for aboveground pools and plus or minus 90 percent for the variable soil carbon pool. Tier 2 requires country-specific carbon data for key factors. Tier 3 requires highly specific inventory data on carbon stocks in varied carbon pools, and repeated measuring of key carbon stocks over time.
Kauffman and co-author Daniel Donato developed a five-step measurement plan to determine accurate results. The first step is to define the project boundaries. Second, divide mangroves into categories according to their type such as coastal fringe, estuarine, or dwarf mangrove. When quantifying carbon stocks it is also necessary to partition mangroves into aboveground and belowground components, which provide more insight into carbon levels and allow for better quantification of emissions or sequestration of carbon.
Finally the frequency of sampling is important. Measuring within five-year intervals may be required to claim carbon market credit.
Rapid 21st century sea level rise and increased storm surges have been cited as a primary threat to mangroves, which have persisted in climates with more gradual sea-level changes by migrating landward or upward. Under current climate trends, the sea level is projected to rise as high as 1 to 1.5m by the end of this this century – and even higher if ice-sheet melting continues accelerating.
Posted by Sven Stadtmann at 8:00 AM