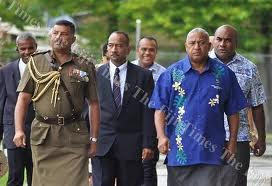 Fiji's Prime Minister Commodore Voreqe Bainimarama, front right, with RFMF Land Force Commander Colonel Mosese Tikoitoga arrive for the opening of the MSG Leaders Summit. Photo by The Fiji Times
Leaders of the Melanesian Spearhead Group have taken a stand against climate change with the signing of the "MSG Leaders Declaration on Environment & Climate Change" yesterday.
The declaration was endorsed after the inaugural MSG climate change meeting that took place in Nadi.
In signing the declaration, the leaders acknowledged the critical importance of a healthy environment for the long term livelihoods of the people of Melanesia.
Under the declaration, a "Framework for Growth" was also adopted. The framework will form the basis for all development and notes the threats of climate change to the viability of some of the MSG's island countries.
The leaders also called for a "Melanesia Blue Carbon Initiative" that will recognise the significant role of mangroves, wetlands, coastal swamps and sea grass beds in removing carbon from the environment.
A "Melanesia Terrestrial Commitment" for conservation was also established during the MSG meetings.
The commitment will contribute to the conservation, sustainable management and restoration of the terrestrial environment and coastal ecosystems.
According to the MSG secretariat, the commitment also formalises an obligation from each of the members to conserve and manage forests, major water catchments and river systems and other eco-systems. It will also ensure that sustainable land practices are applied to agriculture and development.
"Traditional landowner communities will be effectively engaged and supported in the process of managing and conserving their environment," said the secretariat.
Posted by Sven Stadtmann at 7:32 AM