Mangrove carbon and shrimp farming in the news again

"The conversion of mangroves and coastal zones into ponds for shrimp cultivation... releases massive quantities of carbon, thus contributing to climate change."

Alfredo Quarto, Executive Director of Mangrove Action Project, recently denounced WWF's Shrimp Certification Standards at the Seafood Exposition in Brussels. He is supported by a great number of organizations arguing that WWF is greenwashing an environmentally damaging and corrupt industry which destroys one of our most important Blue Carbon ecosystems, namely the mangrove forests.
_________________________________________

Brussels  - Hundreds of NGOs in Asia, Latin America, Africa, North America and Europe are protesting against WWF and its lack of concern for the environment and local peoples' livelihood in the interest of industry profits from shrimp farming.

The conversion of mangroves and coastal zones into ponds for shrimp cultivation for the export industry has caused severe environmental destruction, depletion of coastal biodiversity and wild fisheries as well as shoreline erosion. It increases susceptibility to hurricanes and tsunamis and releases massive quantities of carbon, thus contributing to climate change.

The large scale use of fishmeal exacerbates all these problems. Coastal populations in tropical countries are severely affected by the loss of livelihood, food security and protection from storms. Protests are often met with human rights abuses. 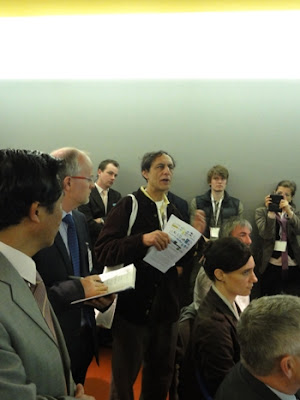 The WWF certification legitimises this situation by giving a “green stamp” to shrimp cultivation. Their certification standards, recently finalized, will be handed over to a certification company named the Aquaculture Stewardship Council (ASC).The standards have been developed by WWF and the aquaculture industry through a process called the Shrimp Aquaculture Dialogue led by a General Steering Committee (ShAD/GSC).

“The destruction of mangroves and coastal zones and the many human rights violations and food insecurity issues that the shrimp industry causes must not be condoned or encouraged, which is exactly what these so-called ‘shrimp standards’ will do,” says Khushi Kabir, Coordinator of Nijera Kori, a NGO working with around 650,000 people in several coastal districts of Bangladesh.

WWF has spent four years and at least US$ two million to develop standards without involving the stakeholders or resource users: i.e. neither the coastal communities of the shrimp producing nations whose livelihoods depend upon a functional coastal ecosystem, nor the NGOs that support them and the coastal ecosystems on which they depend have been involved. The standards will perpetuate an unsustainable and destructive system of aquaculture.

“WWF is greewashing an environmentally damaging and corrupt industry through certification of this luxury product,” says Luciana Queiroz of Redmanglar, a network of 254 organizations in 10 Latin American countries.

NGOs and networks in Asia, Latin America and Africa representing more then 300 organizations concerned with coastal environment and the livelihood of coastal communities have signed a letter of protest to WWF. In addition, around 30 NGOs in Europe and USA as well as many individuals have also signed the letter of protest rejecting the standards (appended below). We call on WWF to practice its stated Mission “to stop the degradation of the planet’s natural environment and to build a future in which humans live in harmony with nature" by its Guiding Principles of conservation and sustainable use of natural resources - and to withdraw from certification of tropical shrimp aquaculture.

The Open Letter will be handed over to WWF on April 25. Natasha Ahmad, Coordinator of ASIA (Asia Solidarity Against Industrial Aquaculture), a network of 18 organisations in eight Asian countries emphasises that “the UN Millennium Ecosystem Assessment concludes that there is a considerable net economic loss by shrimp aquaculture in mangroves and wetlands”.

Posted by Sven Stadtmann at 7:57 AM