Mangrove carbon and shrimp ponds in the Philippines 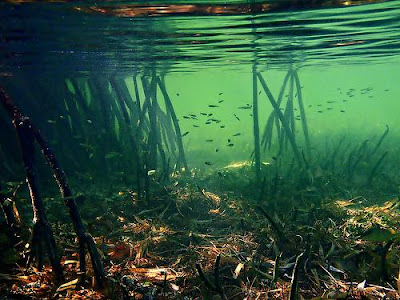 Mangroves stores carbon in both their trees and their soils. Research is urgently needed to understand the true cost of mangrove deforestation and to ensure the protection of these valuable ecosystems. Photo: Phil's 1st Pix
Submitted by Lucy on 3rd December 2012  - by Cecilia Schubert - cgiar.org

In the Philippines there is a manual for anyone interested in starting up their own fishpond. You simply “go to the mangrove, cut it down and dig a fish pond. You then put the fish in and feed them". There is no reference to sustainability or the value of mangroves for local communities.

But this is how livelihoods works - people want to survive. They therefore think about the short-term benefits instead of the potential long-term negative effects. So said Jurgenne Primavera, Chief Mangrove Scientific Advisor, Zoological Society of London at the “Mangroves under pressure: Forgotten wetlands in the changing climate” discussion forum held during Forest Day in Doha.

Aquaculture, including shrimp cultivation, puts a lot of pressure on our mangrove systems and is one of the primary reasons for mangrove deforestation. “Eat a shrimp from a mangrove pond, and in your mouth you have the greatest carbon footprint in the world!” said Boone Kauffman, Research Professor at the Department of Fisheries and Wildlife. Cutting down these natural systems releases high amounts of carbon and depletes storage capacities. Leaving coastlines bare also puts people people living in and around the coast in a very vulnerable position. A healthy mangrove can in fact reduce the vulnerability of coastal people, including smallholder farmers, by acting as a physical barrier against sea level rises and storm water surges, which may become increasingly common.

The interesting thing about mangrove systems is that in addition to its trees, they possess soils similar to those found in peatlands, which means that mangroves, just like peatlands, store huge amounts of carbon. There has been a lot of discussion about deforestation of inland forests, but mangroves have up to now been ignored. There is great potential to expand existing frameworks to include them as well, emphasised Boone Kauffman. However as shown with the textbook example from the Philippines, there is a need to further educate people about their long-term benefits and to engage local community members in protection services.

Finding the true value of mangroves key for preservation

To ensure that mangroves are recognised as the important natural resource that they are; better information dissemination about their value is needed, but also laws, and correct estimations of the carbon that they store. Much more work is needed, before the rate of mangrove deforestation is curbed. Especially important will be finding out the true cost of mangrove deforestation and seeing how much mitigation co-benefits mangroves actually contribute. Blue carbon, carbon stored in water and vegetable living near or in water, is an area with little research on how it can be captured and estimated.