Plankton Decline Across Oceans - Not Good

Plankton, vital for life on earth, marine food webs and oceanic carbon function are reportedly in decline. This can't be good...


The amount of phytoplankton - tiny marine plants - in the top layers of the oceans has declined markedly over the last century, research suggests.
Writing in the journal Nature, scientists say the decline appears to be linked to rising water temperatures.
They made their finding by looking at records of the transparency of sea water, which is affected by the plants.
The decline - about 1% per year - could be ecologically significant as plankton sit at the base of marine food chains. 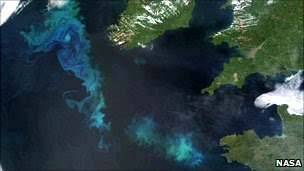 Algal blooms can be imaged from space
This is the first study to attempt a comprehensive global look at plankton changes over such a long time scale.
"What we think is happening is that the oceans are becoming more stratified as the water warms," said research leader Daniel Boyce from in .
"The plants need sunlight from above and nutrients from below; and as it becomes more stratified, that limits the availability of nutrients," he told BBC News.
Phytoplankton are typically eaten by zooplankton - tiny marine animals - which themselves are prey for small fish and other animals.
Disk record
The first reliable system for measuring the transparency of sea water was developed by astronomer and Jesuit priest Pietro Angelo Secchi.
Asked by the Pope in 1865 to measure the clarity of water in the for the Papal navy, he conceived and developed the "Secchi disk", which must be one of the simplest instruments ever deployed; it is simply lowered into the sea until its white colour disappears from view.
“Phytoplankton... produce half of the oxygen we breathe, draw down surface CO2, and ultimately support all of our fisheries”
Various substances in the water can affect its transparency; but one of the main ones is the concentration of chlorophyll, the green pigment that is key to photosynthesis in plants at sea and on land.
The long-term but patchy record provided by Secchi disk measurements around the world has been augmented by shipboard analysis of water samples, and more recently by satellite measurements of ocean colour.
The final tally included 445,237 data points from Secchi disks spanning the period 1899-2008.
"This study took three years, and we spent lots of time going through the data checking that there wasn't any 'garbage' in there," said Mr Boyce.
"The data is good in the northern hemisphere and it gets better in recent times, but it's more patchy in the southern hemisphere - the Southern Ocean, the southern , and so on."
The higher quality data available since 1950 has allowed the team to calculate that since that time, the world has seen a phytoplankton decline of about 40%.
Ocean cycling
The decline is seen in most parts of the world, one marked exception being the . There are also phytoplankton increases in coastal zones where fertiliser run-off from agricultural land is increasing nutrient supplies.
However, the pattern is far from steady. As well as the long-term downward trend, there are strong variations spanning a few years or a few decades.
Old photo of mariners deploying Secchi disk Father Secchi's simple disk has been used for more than 100 years
Many of these variations are correlated with natural cycles of temperature seen in the oceans, including the El Nino Southern Oscillation (ENSO), the North Atlantic Oscillation and the Arctic Oscillation.
The warmer ends of these cycles co-incide with a reduction in plankton growth, while abundance is higher in the colder phase.
Carl-Gustaf Lundin, head of the marine programme at the International Union for the Conservation of Nature (IUCN), suggested there could be other factors involved - notably the huge expansion in open-ocean fishing that has taken place over the century.
"Logically you would expect that as fishing has gone up, the amount of zooplankton would have risen - and that should have led to a decline in phytoplankton," he told BBC News.
"So there's something about fishing that hasn't been factored into this analysis."
The method of dividing oceans into grids that the Dalhousie researchers used, he said, did not permit scrutiny of areas where this might be particularly important, such as the upwelling in the Eastern Pacific that supports the Peruvian anchovy fishery - the biggest fishery on the planet.
Absorbing facts
If the trend is real, it could also act to accelerate warming, the team noted.
Photosynthesis by phytoplankton removes carbon dioxide from the air and produces oxygen.
In several parts of the world, notably the Southern Ocean, scientists have already noted that the waters appear to be absorbing less CO2 - although this is principally thought to be because of changes to wind patterns - and leaving more CO2 in the air should logically lead to greater warming.
"Phytoplankton... produce half of the oxygen we breathe, draw down surface CO2, and ultimately support all of our fisheries," said Boris Worm, another member of the Dalhousie team.
"An ocean with less phytoplankton will function differently."
The question is: how differently?
If the planet continues to warm in line with projections of computer models of climate, the overall decline in phytoplankton might be expected to continue.
But, said, Daniel Boyce, that was not certain.
"It's tempting to say there will be further declines, but on the other hand there could be other drivers of change, so I don't think that saying 'temperature rise brings a phytoplankton decline' is the end of the picture," he said.
The implications, noted Dr Lundin, could be significant.
"If in fact productivity is going down so much, the implication would be that less carbon capture and storage is happening in the open ocean," he said.
"So that's a service that humanity is getting for free that it will lose; and there would also be an impact on fish, with less fish in the oceans over time."
Posted by Steven J Lutz at 9:32 AM