Perhaps the conservation of whales and large fish should be included in blue carbon strategies? 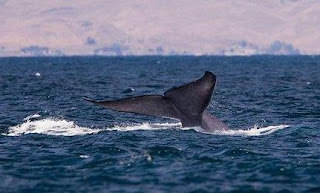 http://www.care2.com/greenliving/whales-and-large-fish-reduce-global-warming.html#
Whales and Large Fish Reduce Global Warming
Jake Richardson (www.care2.com) Sep 7, 2010
Large marine species like whales, sharks and other large fish store a significant amount of carbon in their bodies. A blue whale weighing 90 tons, for example, can store 9 tons of carbon. That whale can live for decades, and keeps that carbon away from the atmosphere. Even once the whale dies and its body sinks to the bottom of the ocean, the carbon is still kept out of the atmosphere.
Whales are like trees in the way they store carbon, and a group of whales is like a forest. Letting whale populations recover could help remove nine million tons of carbon from the environment, which was said to be the equivalent of restoring 11,000 square kilometers of forest. (Source: Nature)
University of Maine researchers studied the relationship between whales and carbon in the oceans in relation to global warming. They estimated that a century of whaling removed 23 million tons of carbon from the oceans, releasing it into the environment and contributing to global warming. Additionally, because whale populations have been reduced greatly, their carbon storing capacity has also been reduced. In other words, the smaller the whale and large-fish populations, the less carbon is stored, and more carbon is available for global warming.
Using iron fertilization is one way researchers in the past have suggested as a means to reduce global warming. The iron causes more carbon to be stored, and prevents it from entering into the atmosphere. However, the researchers were surprised to find that large fish and whales could be even more efficient in sequestering carbon than iron fertilizers. They concluded that helping to grow populations of wild whales and large fish could take large amounts of carbon out of the environment and help reduce global warming. Scientist Andrew Pershing said, “What that tells me is that we can get significant carbon savings by conserving resources in the ocean, protecting whales, larger fish and sharks.” (Source: Physorg.org)
There used to be an estimated 239,000 blues whales, but whaling has reduced that number drastically. Today their population is thought to be between about 5,000 to 12,000. An estimated 73 million sharks are killed every year. It isn’t known exactly how much exactly that abuse contributes to global warming; however, it appears from the research, that protecting large marine animals will benefit not only them, but also the entire planet.
Image Credit: Mike Baird
___________________________________________
Reference: