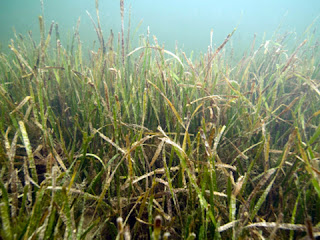 Seagrasses of the area the size of one football field are being lost every half hour due to human impacts such as pollution, dredging and coastal development.


4th October, 2010 / Richard Unsworth
It may be not be as visable as tropical rainforests or wetlands but seagrass plays a vital role in the global ecosystem, says Richard Unsworth, filtering pollution and providing food to fish
Whilst it’s commonly accepted that the world’s coastal and ocean ecosystems are at risk from the activities of man, uncharismatic habitats, namely ‘seagrass meadows’, are often forgotten about and marginalised in conservation agendas.
Seagrasses survive in a range of conditions, from the upper estuarine to marine environments, and are of relatively few species globally (about 70). These flowering plants that grow in the near-shore environment of most of the world’s continents, although not extremely biodiverse in their own right, support a vast array of biodiversity.
They also provide a range of services to mankind. Amongst these biodiverse communities are a multitude of species that are classified as endangered, vulnerable or threatened with extinction (IUCN Redlist), including species of seahorse, turtle and dugong.
Recent research has pointed to alarming loss rates of seagrass that are now equal to that occurring in tropical rainforests and on coral reefs. Seagrasses of the area the size of one football field are now being lost every half hour due to human impacts such as pollution and run-off, boating, dredging and coastal development. Whilst we commonly see evidence from around the world about the loss of tropical rainforests, coral reefs, and wetlands it’s easy to forget about seagrasses. But why does this really matter and how can anyone help?
Seagrass and the carbon cycle
Research is now providing increasing evidence of the role that seagrass play in the global carbon cycle. Seagrass meadows have key roles in trapping the increasing amount of carbon dioxide in the atmosphere, and possibly result in localised mitigation of the negative effects of ocean acidification (e.g. on coral growth).
In many areas of the world where meadows cover vast areas of the seafloor, they also have a major role in trapping marine pollutants. On the Great Barrier Reef in Australia, where pollution of land origin (i.e. nutrients, pesticides and sediments) is one of the current major threats to its long-term future, without seagrasses acting as natural water filters of this pollution, the very survival of the system would arguably have been in doubt long before pollutants reached their current levels.
For all those keen divers and fishermen, whether it is on the Great Barrier Reef, the Caribbean or Poole harbour in Dorset UK, seagrasses require protection for the role they play in supporting coastal fisheries. Zostera meadows in temperate European waters (like many of their tropical equivalents) support a range of fish species. Herring are known to spawn and lay their eggs on the leaves of Zostera, whilst many species such as bass, turbot, garfish, plaice, cod, and flounder live in these meadows for at least part of their lifespan feeding on the abundant invertebrate life. In addition, many birds such as Brent Geese and Widgeon, feed on the blades of the seagrass.
Seagrass and the food chain
Recent research has also found that in some parts of the developing world, where millions of people are 100 per cent dependent on seafood for a source of protein, seagrass can often be the major habitat supplying this food.
Convincing governments and regional planning authorities to help protect seagrasses from the negative effects of poor water quality, anchor dragging, dredging projects and coastal development requires people who understand these habitats and support such action. When communities learn to understand the extent, value and beauty of these habitats in their local region and the factors potentially influencing them, then conservation actions can often be locally driven.
In many parts of the world, community and volunteer groups have learnt about seagrasses and developed strategies to protect them by starting up volunteer monitoring programs such SeagrassWatch and SeagrassNet, as well as using programmes such as the Marine Conservation Societies SeaSearch. For example, community driven seagrass monitoring using the SeagrassWatch protocols in Singapore (the worlds largest container port) has considerably raised the profile of these habitats in the conservation agenda. This will hopefully lead to at least some of their protection in the long-term, rather than their complete loss in a location where large coastal developments are a continual threat to the existence of seagrass.
Without having people passionate and educated about the conservation of their local environment and important habitats such as seagrass it is difficult for conservation charities and non-governmental organisations to fight battles with developers, authorities and governments. Seagrasses are globally important and require conservation action to halt their loss, but this requires more than just legislation, it requires communities, whether they be diving or fishing clubs, scout groups or community councils to want to keep their important resources and become part of this battle.
Richard Unsworth is a senior lecturer in Ecology at the University of Glamorgan
Useful websites on seagrass
World Seagrass Association
Seagrass in the UK
SeagrassNet
Posted by Steven J Lutz at 12:21 PM