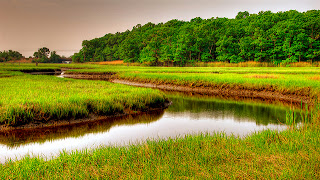 Salt marshes, sea grass beds, and coastal mangrove forests can sequester five times as much carbon as tropical forests (flickr/slack12).
You’ve probably never heard of “blue carbon.” Don’t feel bad. You’re not alone. But it’s worth getting acquainted with.
Basically, it’s the idea that ocean and coastal ecosystems can absorb and trap carbon dioxide that contributes to climate change. In fact, over at SciAm, Robynne Boyd explains that mangrove forests, salt marshes, and sea grasses can hold five times more carbon than tropical forests that typically get more attention.

Because they hold so much carbon, destroying them can release substantial amounts of CO2. People around the world wreck coastal habitats through aquaculture, agriculture, timber extraction and real estate development. To date, human encroachment has destroyed more than 35 percent of mangroves, 30 percent of sea grass meadows and 20 percent of salt marshes.
Stopping such destruction could therefore become an important element in confronting climate change. “Blue carbon is a source of emissions that hasn’t been addressed by the climate community and therefore creates an opportunity to reduce emissions,” says Roger Ullman, executive director of the Linden Trust for Conservation in New York City, which promotes the use of conservation finance and environmental markets. “These fabulous ecosystems…don’t cover a very large expanse of territory, yet still provide enormously important services to humanity and are being destroyed three or four times faster than the rate of tropical forests.”