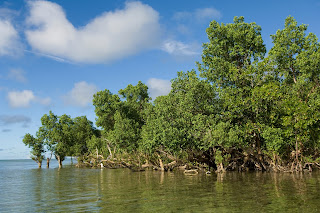 Scientists Offer Warning and Plan For Protecting Earth's 'Blue Carbon'
March 24, 2011
Urgent Action Needed To Halt Increasing Carbon Emissions from Destroyed, Degraded Coastal Marine Ecosystems
Arlington, VA / Gland, Switzerland / Paris, France — The destruction of coastal carbon ecosystems, such as mangroves, seagrasses and tidal marshes, is leading to rapid and long-lasting emissions of CO2 into the ocean and atmosphere, according to 32 of the world's leading marine scientists.
That key conclusion highlights a series of warnings and recommendations developed by the new International Working Group on Coastal "Blue" Carbon, which convened its first meeting in Paris last month. The Working Group was created as an initial step in advancing the scientific, management and policy goals of the Blue Carbon Initiative, whose founding members include Conservation International (CI), the International Union for Conservation of Nature (IUCN), and the Intergovernmental Oceanographic Commission (IOC) of UNESCO.
Much of the carbon emitted when mangroves, seagrasses or tidal marshes are destroyed is estimated to be thousands of years old because the CO2 stored in these ecosystems is found not only in the plants, but in layer upon layer of soil underneath. Total carbon deposits per square kilometer in these coastal systems may be up to five times the carbon stored in tropical forests, due to their ability to absorb, or sequester, carbon at rates up to 50 times those of the same area of tropical forest. The management of coastal ecosystems can supplement efforts to reduce emissions from tropical forest degradation.
According to recommendations from scientists in the Blue Carbon Working Group, whose collaboration pools expertise from 11 countries on five different continents, the existing knowledge of carbon stocks and emissions from degraded or converted coastal ecosystems is "sufficient to warrant enhanced management actions now."
Dr. Emily Pidgeon, Marine Climate Change Director at Conservation International, and a leading blue carbon conservation scientist emphasized, "We have known for some time the importance of coastal ecosystems for fisheries and for coastal protection from storms and tsunamis. We are now learning that, if destroyed or degraded, these coastal ecosystems become major emitters of CO2 for years after the plants are removed. In the simplest terms, it's like a long slow bleed that is difficult to clot. So we need to urgently halt the loss of these high carbon ecosystems, to slow the progression of climate change."
Draining a typical coastal wetland, such as a mangrove or marsh, releases 0.25 million tons of carbon dioxide per square kilometer for every meter of soil that's lost. Global data shows that seagrasses, tidal marshes, and mangroves are being degraded or destroyed along the world's coastlines at a rapid pace. In fact, between 1980 and 2005, 35,000 square kilometers of mangroves were removed globally – an area the size of the nation of Belgium. This degraded area still continues to release up to 0.175 gigatons of carbon dioxide each year — equivalent to the annual emissions of countries such as the Netherlands or Venezuela.
IOC Assistant Director-General and Executive Secretary Wendy Watson-Wright added, "Scientific studies have shown that although mangroves, seagrasses and salt marshes account for less than 1 percent of the total plant biomass on land and forests, they cycle almost the same amount of carbon as the remaining 99 percent. So the decline of these carbon-efficient ecosystems is a valid cause of concern."
Over the course of three days in Paris, scientists concluded the meeting with a set of key priorities and recommendations:
* Enhanced national and international research efforts: such as developing inventory and accounting methodologies for coastal carbon; conducting carbon inventories, conducting targeted research and monitoring to more accurately quantity the greenhouse gas emissions from coastal ecosystem loss, and establishing a network of field demonstrations to build capacity and community input.
* Enhanced local and regional management practices: such as identifying and reducing the primary drivers of high-carbon coastal system degradation, (urban development, agriculture, aquaculture, pollutant and nutrient run-off, dredging, and introduction of artificial constructions), strengthening national to local conservation and protection measures of high-carbon coastal systems, and beginning restoration of lost/degraded systems
* Enhanced international recognition of coastal carbon ecosystems: through established international bodies such as the Intergovernmental Panel on Climate Change (IPCC) and United Nations Framework Convention on Climate Change (UNFCCC)
Scientists emphasized that improved management of coastal marine ecosystems is not meant to become a patent roadblock to nations' economic development or food production, but rather, a targeted strategy that prioritizes conservation of specific, unique, high-carbon coastal zones, which act like global sponges for global CO2. They are recommending that nations and managers better recognize the vital services that these wetlands provide humanity, and prioritize their protection.
"The capacity of coastal wetlands to reduce climate change by capturing and storing carbon dioxide is considerable, but has been overlooked" says Jerker Tamelander, Oceans and Climate Change Manager for IUCN. "If valued and managed properly, coastal ecosystems can help many countries meet their mitigation targets, while supporting adaptation in vulnerable coastal areas."
The working group will meet next in August, and continue their collaborative scientific study. Funding for the group has been provided by the Waterloo Foundation, National Aeronautics and Space Administration (NASA), and the United Nations Environment Programme (UNEP).
To view the scientists full recommendations, visit:
http://www.marineclimatechange.com/marineclimatechange/bluecarbon_recommendations.html
Images available for download and use by media with proper credit:
http://www.smugmug.com/gallery/16118332_SGt9F
(above photo: © Conservation International/ photo by Sterling Zumbrunn)
Posted by Steven J Lutz at 8:23 AM