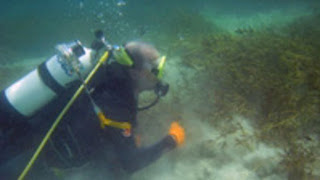 Jim Fourqurean dives near Shark Bay to research the extensive seagrass meadows
A new study has revealed how seagrass meadows off Western Australia's coast could help mitigate climate change.
Jim Fourqurean conducted research on the extensive seagrass meadows at Shark Bay with the aim of showing that such reserves store as much carbon dioxide as trees.
Shark Bay's seagrass reserves stretch for 400,000 hectares, making it one of the largest in the world.
Professor Fourqurean calculated that the meadows would be worth more than $8 billion if priced under the Federal Government's proposed carbon tax.
He hopes the study will encourage the Government to consider including seagrass as part of a carbon offset scheme.
Posted by Steven J Lutz at 9:46 AM