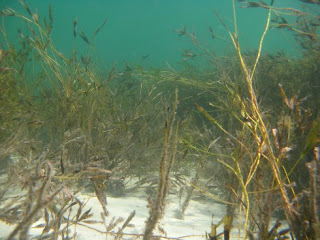 Seagrass meadows at Shark Bay, WA. Researchers are investigating the value of seagrass habitats in sequestering carbon. (Image credit: Gary Kendrick/UWA)
Professor Jim Fourqurean calculates the value of the sequestered carbon at more than eight billion dollars, using the carbon price proposed by the Federal Government of $23 per tonne.
‘When you think of carbon storage and ecosystems, you generally think of canopies of trees, so a lot of attention has gone into forests,’ says Professor Fourqurean.
‘But there is as much carbon on average stored in a seagrass meadow as there is stored in a forest.
‘There are about 4000 square kilometres (400 000 hectares) of seagrasses in the bay, which places it among the largest seagrass meadows that have been recorded in the world.
Professor Fourqurean has calculated the amount of carbon dioxide stored in the seagrass meadows as being, on average, 884 tonnes CO2 equivalents per hectare.
‘So if you multiply that 884 tonnes of CO2 by 400 000 hectares of seagrass, you get about 350 million tonnes of carbon stored in the seagrass meadows underneath Shark Bay,’ he says.
Professor Fourqurean is involved in the global Blue Carbon initiative, a relatively new international scientific network aiming to preserve seagrass habitats as a climate mitigation strategy.
Blue carbon researchers are also exploring the monetary value of the carbon in seagrass meadows as part of a possible offset scheme – which could benefit developing countries, in particular, in protecting seagrass and mangrove habitat.
‘One of the reasons we're doing that is seagrasses are disappearing at a rate faster than the rate at which coral reefs are disappearing and the tropical forests are disappearing,’ says Professor Fourqurean.
‘It's not a simple policy issue to solve, because a lot of marine environments don't have a single owner.
‘The reason seagrasses are disappearing is not because of land conversion, like tropical forests; usually, seagrasses are lost because of poor watershed management practices and declining water quality near shore.’
Shark Bay's seagrass meadows are recognised as a vital habitat for dugongs and sea turtles, and as a food source for the Shark Bay prawn and scallop fisheries.
Posted by Steven J Lutz at 9:51 AM