Blue carbon included in a new UN initiative to protect world’s oceans - under Objective 2 of The Oceans Compact; protecting, recovering and sustaining the oceans’ environment and natural resources and restoring their full food production and livelihoods services through: 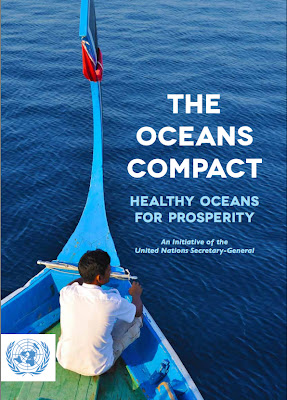 Secretary-General launches new initiative to protect world’s oceans
- Secretary-General Ban Ki-moon today launched a new initiative to protect the oceans and the people whose livelihoods depend on it, and called on countries to work together to achieve a more sustainable management of this precious resource and address the threats it is currently facing.

“The seas and oceans host some of the most vulnerable and important ecosystems on Earth, but the diversity of life they host is under ever-increasing strain,” Mr. Ban said at an event in the city of Yeosu in the Republic of Korea (ROK), to commemorate the 30th anniversary of the opening for signature of the UN Convention on the Law of the Sea.

The Convention, also known as the “constitution of the oceans,” governs all aspects of ocean space, from delimitation of maritime boundaries, environmental regulations, scientific research, commerce and the settlement of international disputes involving marine issues. It was first opened for signature in 1982 and entered into force in 1994; there are 162 parties to it – 161 States and the European Union.

Mr. Ban praised the achievements of the Convention in helping countries establish a legal framework to guide the management of the oceans, the settlement of disputes, and the administration of the international seabed.

“Among its principles, the Law of the Sea recognizes that all ocean issues are related and that they need to be addressed as a whole,” Mr. Ban said, adding that this is in line with the development framework put forward at the UN Conference on Sustainable Development (Rio+20) in June in Rio de Janeiro, Brazil.

However, Mr. Ban also emphasized the need to address multiple issues that threaten the marine environment. To do this, he announced the launch of the Oceans Compact, which will seek to support and strengthen the implementation of the Law of the Sea.

“What we need is to create new momentum for ocean sustainability,” Mr. Ban said. “The Oceans Compact sets out a strategic vision for the UN System to deliver more coherently and effectively on its oceans-related mandates, consistent with the +20 outcome.”

The Compact, Mr. Ban added, will provide a platform to help countries protect the ocean's natural resources, restore their full food production to help people's whose livelihoods depend on the sea, and increase awareness and knowledge about the management of the oceans.

To achieve the objectives of the Compact, Mr. Ban proposed a results-oriented Action Plan along with the creation of an Ocean Advisory Group made up of high-level policymakers, scientists and experts, as well as representatives of the private sector and civil society.

During his visit, Mr. Ban also spoke to young people at the UN Educational, Scientific and Cultural Organization (UNESCO) youth forum, where he asked participants to practice solidarity among generations and lead the way in implementing sustainable measures in all aspects of society.

“From public squares to cyberspace, youth are a transformative force; you are creative, resourceful and enthusiastic agents of change,” Mr. Ban said. “A sustainable future can be ours. The work starts now, and it starts with you. This is a generational imperative… a generational opportunity… that your generation must seize.”
___________________________