Blue carbon in the UAE 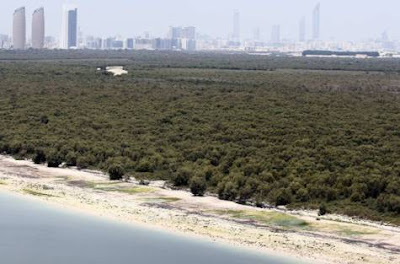 Abu Dhabi: The Abu Dhabi Global Environmental Data Initiative (AGEDI) and the Environment Agency – Abu Dhabi (EAD) launched a Blue Carbon project, which aims to study the correlation between the storage of carbon in ground beneath mangrove trees, seagrass meadows and saltwater marshlands in relation to climate change.

“Blue carbon is a fairly new term in the world of environmental assessments. Unlike other greens, they store carbon beneath the ground they live on, not just in their own bodies,” said Edwin Grandcourt, Manager, Marine Assessment and Conservation Section, EAD’s Terrestrial and Marine Biodiversity Sector.

In January a team of international experts introduced the study’s methodology to start the measurments. This practice is unique in the Arab world and is only being conducted in Madagascar and Indonesia at the moment, according to experts.

“These coastal ecosystems continuously isolate carbon from the atmosphere sometimes at a rate that is faster than tropical rainforests. This helps mitigate climate change by trapping greenhouse gases, which are normally the cause of temperature rises in the atmosphere,” he added.

In an attempt to study this process further, scientists will study areas extending across the emirate of Abu Dhabi from its Eastern Ghantoot region to Bu Tinah Island in the west. The registry of measurements will conclude in May this year.

“This is a guidance project aimed to increase the quality of spatial data because of the application currently being developed. It will also help lead the way for other projects aiming to further the studies we made,” said Ebrahim Bugla, Head of the Marine Assessment and Monitoring Unit at EAD.

After the project ends in October, available results will be given to decision-makers in order to produce policies for the betterment of coastal ecosystems in the emirate.

To the untrained eye, they may look like any other plant in the region. However, hidden in the sediment beneath these mangrove trees lies a mitigator of climate change, a source of nutrition for creatures below the soil and a possible source of fossil fuels thousands of years from now.