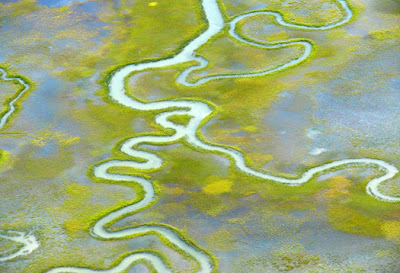 Salt marshes that have been previously turned into farmland could be restored and their ability to absorb carbon  from the atmosphere resume (http://www.greenoptimistic.com).

Allowing farmland that's been reclaimed from the sea to flood and turn back into salt marsh could make it absorb lots of carbon from the atmosphere, a new study suggests, though the transformation will take many years to complete.

Scientists looked at one of the oldest such places in the UK, Tollesbury in Essex. Originally a salt marsh, the site was claimed for farming in the late 18th century, but eventually relinquished in 1995 when the bank separating it from the sea was deliberately breached. Since then it's been reverting to its natural state, though this is very slow process.

'People want quick results, but these things take time,' says lead author Annette Burden, a wetland biogeochemist based at the Centre for Ecology & Hydrology in Bangor. 'You can't expect a piece of land that's been farmed for a century to turn overnight into something like a saltmarsh that has been there for thousands of years. But the evidence is that this will eventually happen, and this study suggests that the land starts absorbing carbon very quickly after its flood defences are breached.'

In 2010 the researchers looked at how carbon moves between soil and air at the site, and at the total amount of carbon accumulated in the soil. They compared the results to nearby natural saltmarsh and farmland.

Their results show that the Tollesbury site exchanges carbon with the atmosphere at a similar rate to the natural marsh, absorbing around 0.92 tonnes of carbon per hectare per year. But even after 15 years its total carbon content is far smaller and its general biological functioning is still very different – the authors think it could take a century or more to catch up.

Known as coastal managed realignment, the process of turning farmland back into salt marsh involves breaching sea walls and letting the land revert naturally to how it once was. It's done for a variety of reasons. At present the main one is to comply with the EU Habitats Directive, which obliges the UK to replace salt marsh that's lost to development with new 'biologically equivalent' habitat elsewhere.

But managed realignment offers many other benefits. It can improve biodiversity, since salt marsh hosts many rare and valuable plant and animal species. It can help protect coastlines from flooding by creating a buffer zone between the sea and infrastructure or homes. It can let government bodies save cash on maintaining costly flood defences. And now this study, published in Coastal and Estuarine Science, suggests another possible benefit – absorbing copious carbon dioxide from the atmosphere and locking it up in the soil. This could help limit the impact of our carbon emissions on the climate.

Similar initiatives are afoot around peat bogs, another enormous store of carbon in the UK landscape. Scientists and conservationists are experimenting with blocking drains and other measures aimed at restoring peatlands that were drained in a misguided twentieth-century effort at turning them into farmland.

This is where Burden's background lies. 'I wanted to take what we've learned about peat bogs and apply it to salt marsh,' she says. 'Peatland has had much more attention from scientists, but people are thinking that salt marsh could be just as important as a store of soil carbon.'

She thinks it's possible that per hectare of land, restoring salt marshes could even be more valuable from a carbon-management perspective than restoring peatlands. Re-wetting a peat bog initially makes it emit methane, itself a greenhouse gas; recreating salt marshes has no such drawbacks. But there is much more peatland that could be restored in Britain than salt marsh, so their overall effect is potentially more significant.

Other studies, some of which we've covered on Planet Earth Online (see links to the right) have shown that it takes a very long time for the mix of plants found in a natural salt marsh to return to a deliberately recreated one. The same seems to be true of the soil's carbon content.

She's now carrying out further research looking at a range of sites that stopped being farmed at different times due to breaches in sea defences during storms, some as long as 100 years ago, to get a better sense of how they develop over time. 'The Essex coast is brilliant for this kind of work, because you have so many places that were returned to saltmarsh at different times - it's like a natural experiment,' she says.