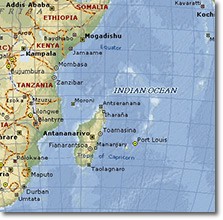 Attendees included experts, stakeholders, and policy makers on climate change impacts, adaptation and mitigation in the region.
A Consensus Statement was released which calls attention to the important impacts and issues surrounding climate change in the region. The importance of Blue Carbon ecosystems in adaptation and mitigation was highlighted, relevant excerpted text follows:

We, senior experts from the Western Indian Ocean (WIO) region,…
Aware of the positive contributions that oceans and coastal areas play in the mitigation of global warming through the environmental services they provide including their role as natural carbon sinks and in regulating climate and temperature;
We, the participants hereby recommend the following:
I. Adaptation
1. Recognition that for the WIO region adaptation remains the top priority for tackling the impacts of climate change and variability, we therefore call for the WIO countries and their partners to prioritize the following interventions:-
(e) Encourage the use of natural carbon sinks in coastal areas such as mangroves, sea grass beds, and coastal wetlands by including these ecosystems in the emission and climate mitigation protocols;
II. Mitigation
2. We encourage WIO countries to take the opportunities provided by climate change to initiate policies that address poverty reduction and mitigation actions and in this regard, the countries should prioritize the following interventions:
f) Rehabilitate critical coastal habitats and their components including coastal forest and seagrass habitats;
g) Enhance the reduction of greenhouse gas emissions through forests by developing and implementing national and regional blue Carbon and REDD–plus programs and strategies with a trans-boundary focus as appropriate.

The full statement can be found at (recommended reading):
http://www.wiomsa.net/images/stories/Climate%20Change%20Conference_Final%20Statement.pdf
A link to the conference web site, which includes lots of interesting material and PPT presentations:
http://www.wiomsa.net/index.php?option=com_content&view=article&id=360:conference-on-climate-change-impacts-adaptation-and-mitigation-in-the-wio&catid=38:events&Itemid=394
And a related news article (translated from French with Google Translate):
Climate Change: A common strategy adopted by the countries of the western Indian Ocean
http://www.lexpress.mu/story/22529-changement-climatique-une-strategie-commune-adoptee-par-les-pays-de-l-ouest-de-l-ocean-indien.html
Béatrice Hope, 03/26/11
Mauritius hosted this week, many experts who study climate change at a regional conference on the subject. The participants developed a common strategy, based on best practices and recommendations made during the conference.
The regional conference on climate change adaptation in the countries of the western Indian Ocean, which took place this week at the Intercontinental Hotel at Balaclava, has a stimulating discussion on the issue. The objective of this conference is to provide countries of the western Indian Ocean and strategically useful and accurate information that would help them in adapting to climate change.
The participants shared their knowledge, experience and solutions to coping strategies and possible mitigation. At the end of the conference, they have developed a regional strategy on this.
The recommendations relate to two strategies: adaptation and mitigation of climate change and its effects. The integration of disaster reduction and risk management programs in national and regional development and strengthening of economic and social resistance are recommended for adaptation. It was also concluded that the need to conduct awareness campaigns is important and urgent to prepare the authorities but also the population, especially in coastal areas. It is also necessary that adequate funding, perhaps through a Coastal Adaptation Fund be allocated to support coastal communities - because they are most vulnerable to climate change.
Regarding mitigation, the recommendations are in short, less polluting means of transport, development of clean and renewable energy, sustainable practices in agriculture, building more eco-friendly and reduce greenhouse gas emissions emissions.
To recap, at the opening of the conference, Monday, March 21 Minister of the Environment and Sustainable Development, Deva Virahsawmy, recalled how the Indian Ocean region is prone to risks due to climate change. "The western Indian Ocean is most affected by climate change, although this region contributes the least to greenhouse gas emissions ... The increasing pressures posed by the demographic and boost the impacts of climate change seriously jeopardize the marine ecosystem and coastal region. Climate change may jeopardize the economic gains gained by the countries of the western Indian Ocean," he said.
The Department of Environment and Sustainable Development has, therefore, created a unit dedicated to the fight against climate change. And the government has launched the Maurice Ile Durable.
The conference was organized by the Western Indian Ocean Marine Science Association (WIOMSA) with the collaboration of the Indian Ocean Commission (IOC) and the Mauritius Oceanography Institute (MOI). It brought together about 200 participants. They come from Mauritius, South Africa, Norway, Sweden, Kenya, Canada, Nigeria and France. They come from regional institutions, NGOs, business communities, governments and other development partners, they are professionals in the field of climate change.
Posted by Steven J Lutz at 4:48 AM