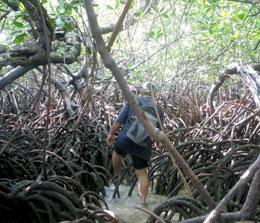 Until now, the amount of carbon locked up in mangrove forests was largely unknown (Dan Donato).
Mangrove forests in tropical regions of the Indian and Pacific Oceans store more carbon than previously recognized, according to a study published today in Nature Geoscience1. The findings indicate that much of the carbon in such forests is found in the surrounding soil, which is rich in organic material. Cutting down mangrove forests, which occupy less than 1% of tropical forest area, could therefore contribute up to 10% of global carbon emissions from deforestation.
Although carbon reserves in other types of tropical wetland forest have been assessed, the amount of carbon in mangroves has been largely ignored, even though they are present in more than 100 countries. For example, it is estimated that clearing of tropical peatlands, which also contain carbon-rich soils, produces about a quarter of all deforestation emissions. The extent of mangrove forests has declined by as much as 50% over the past half century because of development, over-harvesting and aquaculture, so estimating their carbon reserves will be important for future strategies to reduce climate change.
To estimate the abundance of carbon in mangroves, lead investigator J. Boone Kauffman, an ecologist at the Northern Research Station of the US Forest Service in Durham, New Hampshire, and his team sampled 25 mangrove sites across a broad territory that included Micronesia, Indonesia and Bangladesh. This area spans 30 degrees of latitude and 73 degrees of longitude and represents about 40% of the global area covered by these trees.
Sludge stores
Kauffman and his team assessed above-ground and below-ground carbon pools in mangrove sites occupying estuaries and oceanic settings, such as island coasts. They found that these forests hold much more carbon than do boreal, temperate or tropical upland forests — especially in an organic-rich 'muck layer' of soil more than 30 centimetres below the surface.
The team found that this underground layer is thicker in mangrove forests in estuaries than in those near the ocean, accounting for more than 70% of total carbon stores in estuarine mangroves and upwards of 50% in those in oceanic zones.
By combining their findings with global data, the researchers predict that worldwide carbon reserves in mangrove forests may be as high as 25% of those in tropical peatlands, and at the current rate of annual clearance, emissions from mangrove destruction could reach 40% of those from the clearing of peatlands.
Branching out
"This paper represents an important step forward in quantifying and understanding the significant pool of carbon in mangrove ecosystems," says Shimon Anisfeld, an expert in coastal ecology at Yale University in New Haven, Connecticut.
However, the numbers still only represent rough estimates, owing to a lack of information about geographic variation in soil depth, the relative area of mangrove forests in estuaries compared with those near oceans, and the effect of land-use changes on carbon release from soils. They may even be overestimates, because "the authors seem to have sampled some of the largest, most robust stands around," says Thomas Smith, an ecologist at the US Geological Survey in St Petersburg, Florida.
Still, the study could have a substantial impact on conservation efforts around the world, says Gail Chmura, an expert in coastal ecosystems at McGill University in Montreal, Canada. "Hopefully, it will help arguments to extend REDD+ to mangroves," she says, referring to an international plan to pay developing countries to preserve forests in a bid to help reduce global carbon emissions.
Robert Jackson, an ecologist at Duke University in Durham, North Carolina, agrees with Chmura, adding: "Mangrove forests are important for diversity, for coastal stability and for carbon, based on this paper. It gives another justification for preserving mangrove forests."
References
1. Donato, D. C. et al. Nature Geoscience advance online publication doi:10.1038/ngeo1123 (2011).
Posted by Steven J Lutz at 8:30 AM