New evidence on coastal wetlands as carbon sinks
http://blogs.worldbank.org/climatechange/new-evidence-coastal-wetlands-carbon-sinks
Submitted by Marea E. Hatziolos on Mon, 04/11/2011 - 09:38
In the corridors of COP 16 in Cancun last December, `blue carbon’ was being discussed in the context of Reduced Emissions from Deforestation and Forest Degradation (REDD+). The notion that wetlands and near-shore marine habitats constitute significant but largely unaccounted for natural sinks of atmospheric CO2 was just beginning to surface. Since then, there has been a surge in interest in Coastal Carbon Sinks, as evidence begins to mount on their ability to suck up CO2 and store it in their biomass and in deep sub-surface soil layers. A recently published study in Nature GeoScience cites evidence from field measurements that mangroves in Indonesia can actually store carbon at four times the rate of their terrestrial forest counterparts. 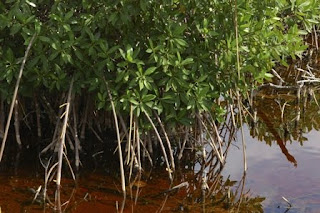 In contrast to terrestrial forests, mangroves and other wetlands store most of the carbon below ground, in a rich organic soil layer, which can run several meters deep. When this soil layer is disturbed—as happens when wetlands are drained or converted for other land use—huge amounts of carbon are released into the atmosphere in the form of CO2, and centuries or millennia of accumulated carbon can be emitted over the course of a few decades.
The extent of these emissions in estuaries and deltas, is highlighted in a detailed World Bank technical report. The preliminary findings of the report were summarized for decision-makers in a brief issued last December at the COP 16. The technical report, Mitigating Climate Change through Restoration and Management of Coastal Wetlands and Near-shore Marine Ecosystems: Challenges and Opportunities, is available on line and is being launched today in Indonesia at a Workshop on Tropical Wetland Ecosystems of Indonesia,in Bali.
The report estimates that, within the major deltas and estuaries subject to drainage which were reviewed for this study, many have experienced losses of close to 1 billion tons of CO2 (more than twice the annual emissions of Mexico), since large-scale alterations to their hydrology first began about 100 years ago. Mega emitters include the Mekong delta in Vietnam, the Wash-Humber delta in the UK, the Changjiang delta in China, and the Sacramento – San Joaquin delta in the U.S. While the horse is already out of the barn for these heavily populated and developed coastal scapes, it is not too late to restore portions of these vital carbon stores (see for example, the work of Restore America’s Estuaries), and to prevent other deltas as well as remaining stands of mangrove forests from going down the same path.
But time is running out. As this and other reports warn, coastal wetlands are being lost at an alarming rate—and the pressure is greatest in the tropics. Coastal wetlands are succumbing to urbanization, agriculture, aquaculture, and to impacts from climate change. It is not clear whether mangroves can keep pace with sea level rise, where hardened coastlines block their landward retreat.
This race against time, however, is fueling some good basic science and economic analysis on how to translate the carbon sequestration services of coastal wetlands and nearshore marine environments into revenue streams, creating incentives for local governments and communities to protect them. Geochemists and ecologists are struggling to wrap their heads around the complex physics and chemistry of carbon flux to come up with the metrics required for Monitoring, Verification and Reporting (MRV) of carbon emissions reduction. Economists are already calculating the value of these services on the Voluntary Carbon Market, with potential links to trade under an expanded REDD+ market
In the World Bank, we are beginning to explore alternative livelihood opportunities related to mangrove conservation and rehabilitation linked to REDD+ in coastal communities in Indonesia and other parts of Southeast Asia, where mangrove forests are the richest, and most under threat. National programs for community-based coastal resources management are likely to offer the best opportunities for piloting and scaling up such an approach. The next phase of COREMAP (The Coral Reef Rehabilitation and Management Program in Indonesia), which is expected to focus on capturing value from coastal ecosystem services, may just be the place to start.
Posted by Steven J Lutz at 8:35 AM