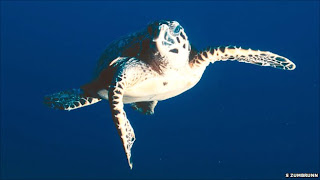 The findings could help explain why the species has gone undetected in the region for so long (Hawksbill turtle image by Sterling Zumbrun)
Scientists have found hawksbill turtles "hiding" in mangrove forests of the eastern Pacific.
The team, that has been tracking the turtles for three years, also found that the critically endangered animals nested in these estuaries.
The discovery of this previously unknown sea turtle habitat was published recently in the Royal Society journal Biology Letters.
It could explain why the species went undetected in the region for so long.
Mangrove forests, which are unique coastal tree and shrub habitats, are also under threat. They could represent an important breeding and nesting site for the species, which was thought to depend on coral reefs. 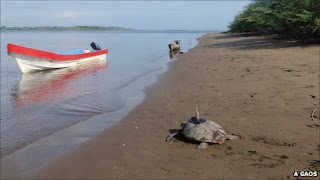 Hawksbill turtle crawling out to see with a satellite tracker on its back (Image: Alexander Gaos)
Alexander Gaos, a conservation scientist with San Diego State University and the Eastern Pacific Hawksbill Initiative, led the research.
He and his colleagues tracked hawksbills in four countries - El Salvador, Honduras, Nicaragua and Ecuador - using satellite tracking tags glued to the turtles' backs.
These trackers revealed that adult hawksbill turtles in the eastern Pacific inhabited in-shore mangrove estuaries.
"For upwards of five decades sea turtle scientists thought hawksbills had [disappeared from] the eastern Pacific Ocean", Dr Gaos told BBC Nature.
"Despite hundreds of sea turtle projects and scientists focusing efforts in the region, no one had located hawksbills.
Our findings help explain this… it's hard to spot hawksbills in mangrove estuaries."
Dr Gaos said that the turtles might be spending their entire lives in these "cryptic habitats".
"Couple that with the fact that there are very few individuals left - hawksbills in the eastern Pacific are one of the world's most endangered sea turtle populations - and it's no wonder researchers didn't know about them!"
The scientists worked with local fishermen and even illegal egg collectors, in order to find hawksbill turtles to fit their tags to.
They hope their revelations about the species' habitat will inform conservation efforts.
Why the turtles were "seeking shelter" in mangroves was not clear.
The scientists think it might be a recent adaptation brought on by a lack of their more typical habitat of coral reefs in the region.
Dr Gaos said: " We now have a better idea of where to look for them, which may help us direct research and conservation of the species, upon which their survival may ultimately depend."

Payments for Ecosystem Services: Getting Started in Marine and Coastal Ecosystems (Forest Trends)