Blue Carbon in The Bahamas 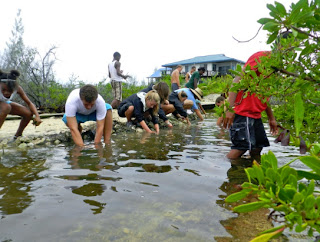 Students Planting Mangrove Propagules
Propagating Awareness One Propagule At a Time
CAPE ELEUTHERA, THE BAHAMAS (29 September, 2011) - On Saturday, September 24th, The Cape Eleuthera Foundation – a non-profit organization dedicated to education and research in sustainability – worked to regenerate the local ecosystem and raise awareness of issues surrounding climate change as part of a global grassroots movement known as Moving Planet. Arranged by the organization 350.org, Moving Planet is a worldwide event during which communities across the globe join together to inspire individuals to take action and promote solutions to the climate crisis.
In honor of Moving Planet, The Cape Eleuthera Foundation hosted a day-long event at The Island School for local community members to learn about 350.org and plant 350 mangrove propagules on campus. During an educational morning seminar, students learned that the number 350 represents the safe limit of CO2 in the earth’s atmosphere and that our current CO2 level is 398. They considered where energy comes from and how global dependence on fossil fuels might be reduced; they were encouraged to think about their power, as global citizens, to speak their minds and stand up for causes that they believe in; and they learned that mangrove trees, which were once abundant on Eleuthera but have been lost in recent decades due to development, play a crucial role in the local ecosystem and in reducing levels of carbon in the atmosphere.
Following the seminar, Island School and Deep Creek Middle School students along with faculty and staff from The Cape Eleuthera Institute got their hands dirty moving rocks, shoveling sand, building walls, digging channels and planting propagules. The event was a huge success and illustrates one of Moving Planet’s core principles: that individuals, when they put their hearts, minds and bodies together, can accomplish more than they’ve imagined. Annabelle Brooks, Research Manager at the Cape Eleuthera Institute, remarked, “It’s pretty incredible how much we got done in just an hour and a half, and this is something we’ve been talking about doing for years.” The Moving Planet mangrove project is intended to become an ongoing study and monitoring project on the topic of mangrove restoration on Eleuthera. We all know that Rome wasn’t built in a day, but as one student observed, “it doesn’t have to be huge to be meaningful.” Slowly, one propagule at a time, we are striving to build a better future for our planet, and hope we’ve inspired others to do the same. 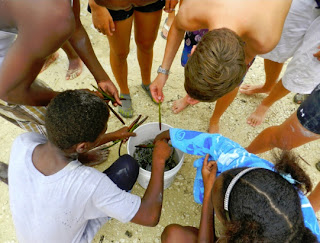 Red Mangrove Propagules Ready For Planting
Posted by Steven J Lutz at 5:59 AM