Restoration project in San Diego CA restores 630 acres of tidal saltwater wetlands - while also restoring natural Blue Carbon function
Located in southern San Francisco Bay, the South Bay Salt Pond Restoration Project is an ambitious effort to return more than 15,000 acres of salt flats to a natural state - as tidal saltwater wetlands. On Tuesday 630 acres were inundated. The project is the largest tidal wetland restoration effort on the West Coast, with a current total of 3,000 acres of former salt flats in the process of restoration.
The project's goal is to replicate that hand of Mother Nature - this includes bringing back natural ecosystem services such as:
• The re-establishment of fish habitat, providing support for recreational and commercial fisheries;
• The enhancing of local biodiversity, providing opportunities for wildlife related tourism activities such as bird watching;
• Improved water quality through natural sediment control;
• Adaptation for climate change through natural protection from sea-level rise; and
• The restoration of the role this wetland plays in storing carbon, thereby helping to mitigate climate change. 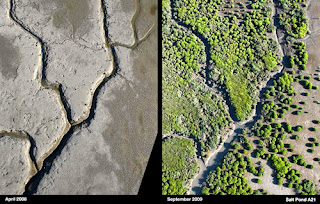 South Bay salt ponds before and after restoration. In just a year, native pickleweed colonizes the mudflats. Photo: South Bay Salt Pond Restoration Project.
_________________________
Oldest Bay Area salt flat turned into wetland
http://www.sfgate.com/cgi-bin/article.cgi?f=/c/a/2011/09/14/MN8L1L44HA.DTL
Wednesday, September 14, 2011, Carolyn Jones, San Francisco Chronicle
With the crunch of a bulldozer Tuesday afternoon, the oldest salt flat in the Bay Area became the region's newest wetland.
Amid cheers from dozens of biologists and state Fish and Game workers, a construction crew ripped through an old levee just south of the San Mateo Bridge, allowing water from Old Alameda Creek to flow into the bone-dry moonscape of a salt flat for the first time since the 1850s. Eventually a levee to the west of that flat will be breached to reconnect the 630 acres to San Francisco Bay.
"These salt ponds took away the lungs of the Bay. Today we're giving them back," said Carl Wilcox, manager of the Bay-Delta region for the California Department of Fish and Game.
Water and mud slopped into the barren whiteness that stretches over more than 1 square mile in the shoreline area known as Eden Landing. Biologists expect fish and birds to start investigating the new habitat immediately and full restoration to be complete in a decade.
Tuesday's levee breach was the first salt-flat restoration in the East Bay. It is part of the 15,000-acre South Bay Salt Pond Restoration Project, the largest wetland restoration program on the Pacific Coast, which has so far been concentrated on the salt ponds around Alviso.
Nature does the work
With the Hayward addition, more than 3,000 acres around the bay have been restored. The remaining 12,000 are still in the planning process, which includes digging ditches where channels once flowed and building new levees to protect shoreline development from flooding.
But otherwise, the tides do all the work.
"We just set the table and let Mother Nature do the rest," said John Bourgeois, director of the South Bay Salt Pond Restoration Project. "Once you let the tides in, the sediment comes in, bringing the seeds, and the whole process will be set in motion."
Salt flats have been a fixture of the shoreline at least since the Gold Rush. Ohlone Indians harvested salt along the waterfront, but then commercial outfits such as Leslie and later Cargill took over. In the late 1990s Cargill sold most of its Bay Area salt ponds to the state and federal governments for wetland restoration.
What biologists discovered, though, was that over the decades some species had grown to like the salt ponds. Threatened snowy plovers, for example, nest on the salt flats because they're similar to their usual nesting spots, beaches, but with fewer dogs and people. So the project calls for the preservation of some salt ponds, although with reduced salinity, said John Krause, Fish and Game biologist.
Economic impacts
Restoring wetlands isn't just beneficial for the environment, it has an economic impact as well, Wilcox said.
Wetlands improve water quality and provide sediment control and protection from sea-level rise, Wilcox said.
In addition, they're likely to draw more people to the shoreline to enjoy the scenery.
Wetland restoration is not inexpensive, however. Acquiring the 15,000 acres cost $100 million, and the planning and levee breaches cost millions more. The parcel opened Tuesday cost more than $4 million to restore.
"I grew up in Oakland, and to see this restored is incredible," said Austin Payne, an engineer for Ducks Unlimited, which worked with the state on the Hayward restoration. "For my kids, all these areas will be open to them."
_________________________
Additional articles:
And now for some good news, Legal Planet Blog, February 6, 2011
http://legalplanet.wordpress.com/2011/02/06/and-now-for-some-good-news/
Restoration Project Changes Look Of SD Bay, 10 News (including video)
http://www.10news.com/news/28967865/detail.html
Bay salt pond restoration reaches milestone tomorrow, KQED
http://blogs.kqed.org/newsfix/2011/09/12/bay-salt-pond-restoration-reaches-milestone-tomorrow/
Levee breach bringing new life to Hayward shoreline, Contra Costa Times
http://www.contracostatimes.com/news/ci_18888220
Levee breach marks key step in wetlands restoration, East Bay News
http://abclocal.go.com/kgo/story?section=news/local/east_bay&id=8352745
Posted by Steven J Lutz at 6:15 AM