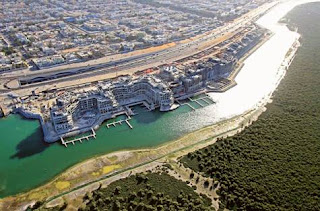 The eastern mangroves cover a 1.2-kilometre stretch in Abu Dhabi. The emissions of greenhouse gases in Abu Dhabi is currently amongst the highest in the world.
Abu Dhabi: The pace of development is the major challenge to the efforts for environmental conservation in Abu Dhabi, according to the recently appointed Secretary General of Environment Agency, Abu Dhabi.
"Economic development is progressing much faster than our understanding of their impact on the environment, which can lead to very costly solutions and measures," Razan Khalifa Al Mubarak told Gulf News in an exclusive interview.
It is critical that the environment is being considered at the planning stage and not just as an afterthought, she said.
Razan said Abu Dhabi is blessed with amazing biodiversity and natural resources. However, with the population predicted to more than double between now and 2030, there will be increased demand for land to build on as well as energy, water, food and other products, she said.
"As Abu Dhabi continues to develop, it is critical that we have a strong and effective environmental regulatory framework, with a clear strategy focused on tackling the big issues in partnership with government, non-government organisations, academia and the private sector.
"This will help ensure that economic growth provides the desired benefits without damaging Abu Dhabi's natural heritage and long-term future prospects. Only in this way can we achieve a prosperous society in a sustainable environment," Razan said.
The availability of water is a particular and urgent concern, she said. "Currently around 65 per cent of all the water we use is supplied from groundwater, the remainder being provided by desalination and recycled water. But in our arid environment groundwater renews itself slowly, causing the supply to diminish."
A growing population means a future need for increased water supplies, and as groundwater levels diminish more reliance will be placed on energy-and carbon-intensive desalination processes, the official said.
The per capita consumption of goods and emissions of greenhouse gases in Abu Dhabi is currently amongst the highest in the world. Abu Dhabi will need to look to both policy changes and changes in individual habits to reduce this consumption and these emissions to acceptable levels, she said.
To meet the growing demand, much of the raw materials will have to be imported, increasing the environmental impacts associated with sea and land transport. Carbon dioxide and other gaseous emissions are also likely to increase, both from the manufacturing processes and the transport of raw materials and end produce. Volumes of waste and hazardous waste will increase, requiring effective and safe treatment or storage, Razan said.
Expressing her concerns about climate change, she said possible increase in sea levels due to global warming will put further pressure on vulnerable areas such as the coastal zone which is already under pressure from development. In Abu Dhabi, mangrove forests and sea grass in these areas will suffer as a result of rise in sea levels and water temperatures, the official said.
Adapted native plants
"We have 450-500 terrestrial plant species, many of which have uniquely adapted to conditions of high temperatures, high salt levels and low rainfall," Razan Khalifa Al Mubarak said. "This is also true for the desert animals which have adaptive strategies to help them survive in the harsh desert environment."
However, temperatures are now increasing at a rate not seen historically which may lead to instability in these finely balanced ecosystems making them increasingly vulnerable, she said.
Posted by Steven J Lutz at 7:04 AM