Microorganisms in rivers and streams play a crucial role in the global carbon cycle that has not previously been considered. Freshwater ecologist Dr. Tom Battin, of the University of Vienna, told a COST ESF Frontiers of Science conference in October that our understanding of how rivers and streams deal with organic carbon has changed radically. Microorganisms such as bacteria and single-celled algae in rivers and streams decompose organic matter as it flows downstream. They convert the carbon it contains into carbon dioxide, which is then released to the atmosphere. 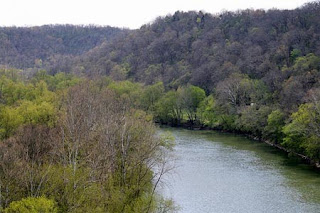 Recent estimates by Battin's team and others conclude there is a net flux, or outgassing, of carbon dioxide from the world's rivers and streams to the atmosphere of at least two-thirds to three-quarters of a gigatonne (Gt) of carbon per year. This flux has not been taken into account in the models of the global carbon cycle used to predict climate change.
"Surface water drainage networks perfuse and integrate the landscape, across the whole planet," says Battin, "but they are missing from all global carbon cycling, even from the IPCC (Intergovernmental Panel on Climate Change) reports. Rivers are just considered as inert pipelines, receiving organic carbon from Earth and transporting it to the ocean." This thinking, according to Battin, has changed radically in last few years.
He argues that the latest estimates of how much carbon is transferred to the atmosphere from rivers and streams are very conservative. "The actual outgassing of carbon dioxide is probably closer to 2 Gt of carbon per year," says Battin. "Our surface area estimates only consider larger streams and rivers, because it is very hard to estimate accurately the surface area of small streams. So small streams are excluded, although in terms of microbial activity, they are the most reactive in the network."
Two gigatonnes of carbon per year is close to half the estimated net primary production of the world's vegetation each year. Realising that this quantity of carbon may be delivered straight back to the atmosphere, rather than being taken to the ocean where some of it is removed by marine organisms and ends up in sediment, could have profound consequences for our understanding of the system.
In a disturbing development, Battin's team lab has recently found that engineered nanoparticles can significantly compromise the freshwater microbes involved in carbon cycling. "This finding is a real challenge to science," says Battin. "Engineered nanoparticles such as titanium dioxide are expected to increase in the environment, but it remains completely unknown how they might affect the functioning of ecosystems."
This research was presented at the "Complex Systems: Water and Life" Frontiers of Science conference, organized by European Science Foundation (ESF) and COST, 29-31 October, Taormina, Sicily.
Posted by Steven J Lutz at 7:41 AM 1 comment: