A Blue Carbon session was held at the National Council for Science and the Environment's “Our Changing Oceans” meeting last week in Washing D.C. (Jan. 19-21).
The session focused on our current range of potential approaches to sequester carbon in the oceans, i.e. the blue carbon approach and ocean fertilization. Issues discussed included the need for comprehensive research (including the role of science funding agencies), what a potential blue carbon market would look like, governance issues in the coasts and open oceans, readily available policy opportunities, and how to tackle greater policy targets.
The blue carbon panelists included Steven Lutz (myself), Director of Blue Climate Solutions, Linwood Pendleton, Director of Ocean and Coastal Policy, Nicholas Institute, and Steve Crooks, Climate Change Director, ESA PWA.
Ocean fertilization panelists included Ken Buesseler (co-chair), Senior Scientist, Marine Chemistry and Geochemistry Dept. Woods Hole Oceanographic Institution, Fei Chai, Professor of Oceanography School of Marine Sciences and Climate Change Institute, University of Maine, and Chris Vivian, Cefas, UK Department for Environment, Food and Rural Affairs.
A list of recommendations was requested from the conference organizers, here is what we came up with:
Task 1. Recognize the importance of coastal and ocean carbon sequestration in climate change discussions (e.g. Governments, IPCC, COP)
Task 2. Regarding coastal and ocean carbon sequestration policy and research, we need to identify cabinet level leadership (e.g. establish an SOST working group, include in White House CEQ guidelines, and include in National Ocean Policy)
Task 3. To encourage coordinated US federal research and policy regarding coastal and ocean carbon sequestration, we need to identify who’s in charge at the agency level and their roles (e.g., DOE, DOI, NSF, NASA, NOAA, USGS, EPA etc.)
Task 4. Fund and develop comprehensive ocean carbon science programs that examine the fate of carbon from watersheds to the open ocean.
Task 5. While we recognize the need for research on coastal and ocean carbon sequestration we should take immediate action to conserve ecosystems that are already known to sequester carbon.
Blue Carbon at the Executive Level - on Friday, one of the questions posed by a member of the audience to Dr. John Holdren, Assistant to the President for Science and Technology and Director of the White House Office of Science and Technology Policy, asked about views on ocean fertilization. The question was framed in a context with blue carbon.
Dr. Holdren’s answer drew clear distinction between blue carbon and ocean fertilization. He included mention of seagrasses and mangroves (as potential natural carbon sinks) and referred to ocean fertilization as “fiddling with the oceans.” The video of his comments should be available on the Our Changing Oceans web site later this week. 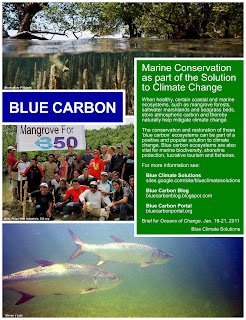 BCS flyer for the Our Changing Oceans meeting.
For the Our Changing Oceans on the web see:
http://communities.earthportal.org/ncseoceans2011/
For the Breakout Session, Blue Carbon: Carbon Sequestration in the Marine Environment, including many blue carbon references (click on articles), see:
http://communities.earthportal.org/ncseoceans2011/topics/view/55870/
Posted by Steven J Lutz at 10:40 AM 2 comments: 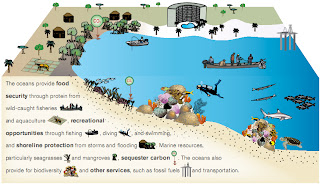 The image was included in a recent policy brief issued by Conservation International - People and Oceans, managing marine areas for human well being (CI, 2011, 19 pp), and is available at:
http://www.science2action.org/index.php?option=com_content&view=article&id=139
Posted by Steven J Lutz at 2:48 PM 2 comments: 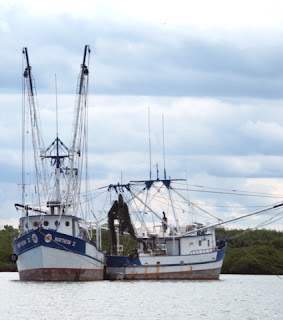 Just last month the fisheries minister of Belize announced that all forms of trawling will be banned in Belize effective December 31, 2010.
Oceana worked with the government in facilitating the buyout of the existing two trawlers owned and operated by the Northern Fishermen Cooperative Association (NFC). Additional pressure came from UNESCO, which threatened to take the Belize Barrier Reef System off its World Heritage Site list.
My though on this - if the dragging of the nets by the two NFC boats was damaging the seagrass meadows, and thereby impacting the carbon sequestration function of this ecosystem, then...

Could the buyout of bottom trawlers be funded by a blue carbon market or fund?

New method measures carbon storage potential and reduces greenhouse gas
http://westernfarmpress.com/management/new-method-measures-carbon-storage-potential-and-reduces-greenhouse-gas
Dec. 17, 2010
A new methodology to assess the potential to store carbon in U.S. wetlands, forests and rangelands ecosystems — and thus to reduce emissions of greenhouse gases to the atmosphere — will help find ways to mitigate the impacts of climate change, the Department of the Interior announced.
“This new research by scientists from Interior’s U.S. Geological Survey is a cutting-edge development that will inform land management policies and planning for the long-term storage of carbon to help lessen the impacts of climate change,” Deputy Secretary of the Interior David J. Hayes said. “This innovative initiative, which Congress called on Interior to undertake in 2007 energy legislation and which Secretary Salazar outlined at the 2009 Copenhagen climate conference, will improve the nation's understanding of amounts, sources, and transport of carbon at scales suitable for use by land managers and decision makers.”
National assessment
“Using this methodology, the USGS will now be able to conduct a national assessment to determine how much carbon is being stored in ecosystems and to estimate the capability to use natural systems – such as wetlands, forests and rangelands – to absorb greenhouse gases. The assessment will be conducted on a regional basis,” said USGS scientist Zhiliang Zhu.
The process of removing carbon from the atmosphere and storing it in vegetation, soils and aquatic environments is known as biological carbon sequestration. The movement of greenhouse gases in ecosystems results from natural ecosystem processes and human activities. This assessment accounts for three gases, which are carbon dioxide (CO2), methane (CH4) and nitrous oxide (N2O).
As part of the national assessment, USGS scientists are evaluating major processes that affect carbon sequestration capability and greenhouse gas emissions. Those processes include climate change, changes in land use and land cover, changes in land management activities, and ecosystem disturbances such as wildfires.
This methodology incorporates public comments that were solicited on a draft methodology published in July 2010. It also builds upon the USGS rapid assessment report published in December 2009 to estimate the carbon storage potential in the nation’s forests and soils. The new methodology focuses on all of the nation’s ecosystems and incorporates data and methods (including land use and biogeochemical models and aquatic models) that were updated since the rapid assessment was published. This methodology also incorporates suggestions from an interagency science panel, an extensive peer-review process and comments from other federal agencies.
In addition, the USGS is conducting research on a number of other fronts related to carbon sequestration. These efforts include evaluating the potential for storing carbon dioxide in geologic formations below Earth’s surface, potential release of greenhouse gases from Arctic soils and permafrost, and mapping the distribution of rocks suitable for potential mineral sequestration efforts.
The methodology was developed in accordance with the Energy Independence and Security Act of 2007, which directed the Department of the Interior to develop the methodology and conduct the national assessment. This research also benefited from discussions with a variety of organizations and stakeholders, such as the Department of Agriculture (particularly the U.S. Forest Service) and Department of Energy, the Environmental Protection Agency and the science community.
For more information about this assessment methodology, visit
http://pubs.usgs.gov/sir/2010/5233/
Posted by Steven J Lutz at 12:44 PM 1 comment: 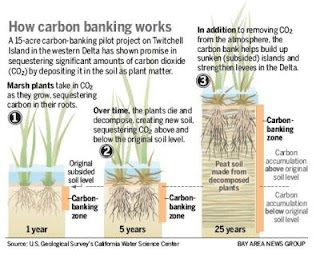