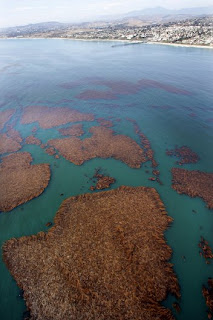 Large beds of giant brown kelp are thriving in the artificial reef built off the coast of north of the San Onofre Nuclear Generating Station (image credit Eduardo Contreras).
Independent monitoring by scientists at the shows that the reef reached nine of 14 benchmarks during its first year of operations. Power company officials said Wednesday they are poised to meet the other standards, perhaps this year.
The Wheeler North Reef is part of a piecemeal strategy by ocean advocates for using artificial reefs to boost habitat for marine creatures, improve fishing and provide more opportunities for divers. It was required by the California Coastal Commission to make up for the ecological damage done by the San Onofre Nuclear Generating Station in , which is owned by Southern California Edison, Gas & Electric Co. and .
On Wednesday, showed off the giant kelp forest that has grown over the past several months and highlighted the first UCSB monitoring report. Kelp forests sometimes are called the “rain forests of the sea” because they support hundreds of species of marine life.
“We are really well on the way to having duplicated a very complex ecosystem on a large scale,” said David Kay, head of environmental projects for the company. “You look offshore and you see this massive area of kelp canopy floating on the surface. … This is an amazing accomplishment.”
As he talked, the 174-acre reef spread out below a company helicopter for about two miles south of the pier.
From the air, it’s obvious where placed boulders at depths of about 30 feet because wavy tendrils of brown kelp — anchored to the rocks below — carpet the ocean’s surface like giant strands of hair. A few fishing boats bobbed in the gentle swells at the edge of the shimmering marine forest while seabirds rested and fed on the matted kelp.
Before the artificial reef was constructed, “Nothing was there,” Kay said. “You don’t have to be a scientist to say kelp density turned out pretty good.”
Ecologist Stephen Schroeter of UCSB’s Marine Science Institute was more reserved, but his assessment was upbeat.
“They have done a really nice job,” said Schroeter, part of the reef monitoring team that regularly dives at the site. “It looks like it’s on a hopeful trajectory.”
He said some of the unmet benchmarks may prove challenging, particularly one that sets the amount of fish in the reef by weight. The goal is 28 tons; only 16 tons were observed in the first year.
Despite the positive trendline, Schroeter urged caution about the widespread use of a similar approach.
“There may in fact be other places where artificial reefs may be a very useful mitigation measure, and we are learning important lessons about how you might want to go about doing that,” he said. “But I don’t think it’s a recipe for making kelp up and down the coast.”
The roots of the Wheeler North Reef go back to 1974 when the California Coastal Commission issued a development permit for units 2 and 3 of the nuclear plant. Years of monitoring led to new permit conditions to make up for ecological harm done by the plant.
They include restoration of the San Dieguito marsh, financing of a marine fish hatchery and construction of an artificial reef to replace kelp beds harmed by the plant.
The reactors are cooled by a system that each day takes in the volume of seawater equal to one square mile 14 feet deep, according to a UCSB analysis. The water is heated by the plant and released through pipes in the ocean. The discharge plume has redistributed sediment, decreasing the amount of light that reaches the kelp growing directly offshore of the plant.
UCSB researchers said cloudy water offshore caused a substantial reduction in the kelp forest, resulting in losses of fish and invertebrates.
The new reef is north of the nuclear plant near . It started in 1999 as a 22.4-acre experimental project designed to guide construction of a larger reef.
“We don’t want to have to go back and redo things,” said Kay at .
The rocks, quarried at , are roughly the size of medicine balls and scattered in a single layer on the sand, not piled on top of each other.
Kay said the goal was to create a dynamic ecosystem in which the boulders are jostled during storms so they can clear out patches of old-growth kelp and create a natural mosaic.
“To get giant kelp coming back generation after generation, there always needs to be bare rock on the reef, and you are only going to get that if you have an unstable reef,” he said.
So far, the rocks have performed as Kay hoped. The first of UCSB’s annual reports said the rocks were not sinking into the sand — a possible threat to the reef. It also said that fish abundance and diversity at Wheeler North was similar to or greater than natural reefs nearby. The study team didn’t find evidence of invasive species harming the reef.
“Generally, things are going well,” said Susan Hansch, chief deputy director at the Coastal Commission. “The kelp is flourishing.”
She warned that is not in the clear yet. “They are going to be monitoring and responsible for these mitigation sites for a long time,” she said.
Kay is hopeful that the reef will meet all its performance targets this year without additional intervention by . The company is responsible for the reef for at least 40 years, though Kay expects it to last for centuries.
“It goes on its own at this point,” he said. “We are just watching it grow.” 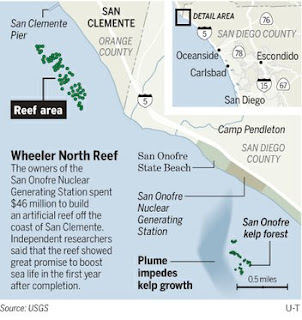 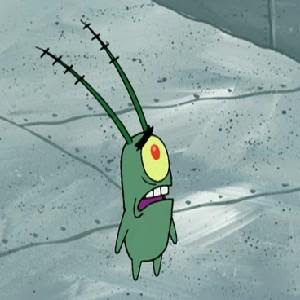 Plankton, the foundation of the oceanic carbon function and vital to the global carbon cycle, imperiled by ocean acidification.

Ocean acidification not only threatens coral reefs, and fish and shellfish larvae, but also plankton, the foundation of the oceanic carbon function and marine food webs.

Living healthy oceans are a crucial element of the global carbon cycle.

Only an immediate reduction in carbon emissions can prevent our oceans from continuing to become more acidic.
____________________
How Acidification Threatens Oceans from the Inside Out (Scientific American, Aug. 2010)
Carbon dioxide emissions are making the oceans more acidic, imperiling the growth and reproduction of species from plankton to squid
http://www.scientificamerican.com/article.cfm?id=threatening-ocean-life
The "Other" Carbon Problem - Ocean Acidification (Counter Currents, )
http://www.countercurrents.org/cohen190810.htm
World’s Marine Plankton in Peril - 40% Decline Since 1950 (Planetsave, )
http://planetsave.com/2010/08/04/worlds-marine-plankton-in-peril-40-decline-since-1950/

We like - "make ecosystem restoration a central strategy in climate mitigation and adaptation."
(& don't forget blue carbon ecosystems!)
________________________________
http://www.treehugger.com/files/2010/08/how-can-obama-cut-carbon-emissions-without-climate-bill.php
How Can President Obama Cut Carbon Emissions Without a Climate Bill?
Matthew McDermott, TreeHugger, New York, NY on 08. 5.10
With Congress still not able to get out of its own way and actually move forward any legislation with the word 'climate' in it, what options does President Obama have to make good on his oft-stated commitments to make reductions in greenhouse gas emissions? Leaving aside the EPA mandating carbon emission reductions (remember it's now officially a pollutant), over at Climate Progress, the executive director of the Presidential Climate Action Project has some good suggestions:
First is a great suggestion: Create a national clean energy roadmap and part of that is helping all states adopt a series of energy and climate policies outlined by the Center for Climate Strategies. These 23 sector-based policies at the state level would create 2.5 million net new jobs by 2020 while reducing emissions 27% below 1990 levels--that's well over 10% below what the President has pledged, if still not in line with scientific recommendation.
Second is Declaring a war on energy waste. It's pretty shocking to think that the US economy wastes 87% of the energy it consumes, and that in energy efficiency it ranks 22nd in the world. Or maybe it's not, considering that the US doesn't rank near the top of many indices for social welfare, only topping the charts when it comes to military spending. But I digress...
PCAP urges Obama to challenge the US to become the world's most energy-efficient industrial economy by 2035, something which could be done by improving energy efficiency at the rate of 3.1% annually.
Number three requires Congress, but avoids the dreaded C-word. It's also something which about half the staff at TreeHugger has written is a crucial but overlooked component of reducing oil consumption and sound climate policy. It's Reinventing national transportation policy.
Since transportation is responsible for such a large percentage of oil consumption and greenhouse gases, shifting federal funding from overwhelmingly supporting new road-building to supporting mass-transit (and creating more walkable/bikeable communities) is key in tackling climate change and oil dependency. It's also broadly favored in public opinion polls.
Going right along with that is Stopping fossil fuel subsidies. The way PCAP describes it is brilliant:
Currently the US gives 2.5 times more subsidies to fossil fuels than clean energy sources.
The IEA says phasing out over the next decade the $560 billion subsidies that fossil fuels get annually would achieve more than 30 percent of the cuts in carbon emissions necessary to keep rising atmospheric temperatures at no more than 2 degrees Celsius above pre-industrial levels.
Fossil fuel profits and the expense of taxpayers and a planet with a roughly comparable climate to that of today? Sounds like a bad bargain.
The last suggestion is perhaps the most under-publicized, yet potentially hugely effective, of the lot: Make ecosystem restoration a cental strategy in climate mitigation and adaptation.
Rehabilitating ecosystems which human activity has degraded is hugely helpful in reducing the impacts of storms along coastlines, increasing the ability of the landscape to absorb carbon emissions, controlling erosion, flooding, and more. To accomplish this through human machination is a far more expensive proposition than simply working with nature so that it can do it naturally, and except for the costs of getting our artifices out of the way and restoring the landscape, do it for free.
Good thoughts all around. Far less contentious than crossing the Rubicon with the EPA cutting out Congress and having a go at regulating carbon emissions itself.
Posted by Steven J Lutz at 2:35 PM 1 comment:

US Moving Ahead With Ecosystem Markets Despite Cap-and-Trade Setbacks