GEF council members approve more than half a billion dollars worth of projects – the second largest GEF work program in its history
http://www.thegef.org/gef/content/gef-council-members-approve-over-half-billion-dollar-worth-projects-%E2%80%93-second-largest-gef-wor
Washington DC, November 9, 2011
Today the GEF Council, the governing body of the Global Environment Facility, approved an unprecedented large work program within the fifth replenishment cycle of the GEF. With 40 stand alone projects and 9 programmatic approaches amounting to $516.40 million, this work program represents double the average submissions made since its creation 20 years ago.
In addition, an impressive amount of $4.1 billion has been leveraged from GEF partners to further expand the reach of the program. As a result, 99 recipient countries will benefit from this work program alone, the largest number ever included in a single submission by the GEF.
This work program is however, not only remarkable because of its size, but also due to the key innovations around which it has been designed.
In terms of programmatic strategy, this work program addresses environment issues in the most holistic, comprehensive manner achieved so far, as evidenced by twenty one multi-focal area projects, joint GEF Agency (UNDP, UNEP, World Bank) partnerships in four projects/programs submitted and four initiatives combining the GEF resources with those of other environment related trust funds. Comparative advantages of each partner, are assembled in this most effective program implementation arrangement ever put together by the GEF.
For example, with the Marine and Coastal Protected Areas project, Brazil will significantly increase protection of its marine area by addressing unsustainable fishing practices, discharge of pollutants and industrial impact in an integrated manner. In addition, this project includes financing mechanisms to generate revenues for the sustainable management of these protected areas through climate change related mechanisms (Blue Carbon) and payment for ecosystem services.
This work program includes many other large-impact projects around the world. For example in China, the Main Streams of Life-Wetland Protected Area System Strengthening for Biodiversity Conservation will create a strong national system for managing 48,962,400 hectares of wetlands, and protect an additional 1.7 million hectares containing 50 unprotected threatened species.
Similarly, the impact of Sustainable Forest Management (SFM/REDD+) projects will in this work program reach proportions never achieved before. Through the involvement of indigenous peoples and local communities these projects alone will save over 3 million tons of CO2 emissions in combating deforestation and forest degradation, while creating 2.5 million hectares of new protected areas, and implement sustainable management regimes across1.3 million hectares more.
One of the most innovative International Waters initiatives in this work program is the “Blue Forests” project. Research has recently found coastal habitats like mangroves, sea grass beds, coral reefs, and salt marshes (referred to as Blue Forests) to trap more carbon per unit area than terrestrial habitats. For the first time their true worth as key assets in environmental management has been recognized. The objective of this project is to develop methodologies to estimate carbon trapped by coastal and marine systems as well as to demonstrate their economic value.
This most ambitious work program reflects a holistic approach to environmental challenges, is based on community and indigenous people participation, maximization of impact through strong partnerships and financial leverage, all of which are a direct result from the string of key reforms that the GEF has carried out during the last few years.
Posted by Steven J Lutz at 5:18 PM 3 comments: 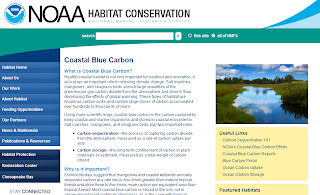 The US National Oceanic and Atmospheric Administration (NOAA) is setting the standard high for Blue Carbon sites with their Coastal Blue Carbon web page. This may be the first “government” site on Blue Cabron. Please see the links, the site speaks for itself.
Coastal Blue Carbon
NOAA’s Coastal Blue Carbon Efforts
Congratulations to NOAA and the Habitat Conservation Office!
-Steven
Posted by Steven J Lutz at 10:54 AM No comments: 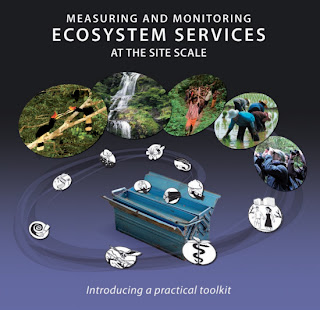 A ‘toolkit’ for measuring ecosystem services at the site scale is released
http://www.unep-wcmc.org/a-toolkit-for-measuring-ecosystem-services-at-the-site-scale-is-released_751.html

'Measuring and Monitoring Ecosystem Services at the Site Scale' introduces a new ‘toolkit’ for measuring ecosystem services at the site scale which is accessible to non-experts and delivers scientifically robust results. This booklet explains some key concepts including the need to consider a ‘plausible alternative state’ to measure differences resulting from changes in land management and use, and the importance of identifying beneficiaries.
The work has been coordinated by researchers and conservation biologists from Anglia Ruskin University, BirdLife International, Cambridge University, Royal Society for the Protection of Birds and UNEP World Conservation Monitoring Centre, with input and guidance provided by over 50 other scientists.
What can the toolkit do?
The methods and approaches presented in the toolkit have been tested at four sites to-date (2011), including Shivapuri–Nagarjun National Park (Nepal), Phulchoki Mountain Forest (Nepal), Montserrat Centre Hills (Montserrat) and Wicken Fen (UK), with implementation and support from Bird Conservation Nepal, the Department of Environment in Montserrat and the National Trust in the UK. In 2012, there are plans for further testing at a number of additional sites and publication of the methods and results through the peer-reviewed scientific literature, as well as the development of a ‘toolkit’ user-manual.
The toolkit has been developed, thus far, through two projects: A Cambridge Conservation Initiative (CCI) project entitled ‘Measuring and monitoring ecosystem services at the site scale: building practical tools for real-world conservation’ and a BirdLife International / Darwin Initiative project entitled ‘Understanding, assessing and monitoring ecosystem services for better biodiversity conservation’.
The booklet is available to download below:
Measuring and monitoring ecosystem services at the site scale.html (PDF,1.7Mb)
Posted by Steven J Lutz at 8:11 AM No comments: 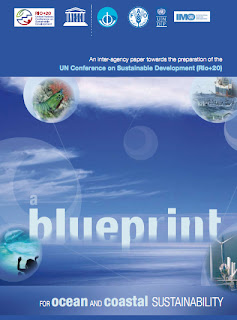 Global Blue Carbon Market Proposed by Five UN Agencies
http://www.ens-newswire.com/ens/nov2011/2011-11-01-01.html
PARIS, France, November 1, 2011 (ENS) - A global blue carbon market that would create direct economic gain for those who protect ocean habitats is the main feature of a plan issued today by five United Nations agencies to improve the management of the world's ocean and coastal areas.
The "Blueprint for Ocean and Coastal Sustainability" says that the agencies intend to work with existing international carbon markets to define and implement a blue carbon market for protecting marine and coastal carbon sinks. 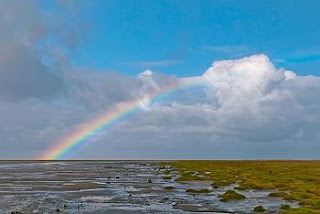 Rainbow frames a salt marsh in the Wadden Sea, Germany. (Photo by Peter Femto)
Oceans act as sinks for the greenhouse gas carbon dioxide, CO2. In fact, the oceans are the largest active carbon sink on Earth, absorbing 26 percent of all CO2 emissions.
One reason for the oceans' big share of carbon is its biological pump, which removes carbon dioxide from the ocean surface, changing it into living matter and distributing it to the deeper water layers.
Out of all the biological carbon captured in the world, 55 percent is taken up at sea by marine living organisms, and so is called blue carbon.
At least half of this is captured by the ocean's vegetated habitats - mangroves, salt marshes, seagrasses, and seaweed. These plants cover less than 0.5 percent of the seabed, but play an important role in regulating the climate and mitigating climate change.
The five UN agencies that authored the Blueprint - UNESCO, the Intergovernmental Oceanographic Commission, the United Nations Development Programme, the International Maritime Organization, and the UN Food and Agriculture Organization - warn that although the oceans account for 70 percent of the planet's surface, only one percent of that area is protected.
To develop and implement a global strategy on blue carbon, their Blueprint says standards must be agreed for blue carbon monitoring and certification. Targets must be set for habitat protection in the context of blue carbon.
In addition, economic valuation methodologies must be developed for blue forest ecosystem services.
The agencies say they will work to create global acceptance of ocean and coastal habitats as a new form of tradable carbon market with a "global blue carbon fund."
Within international climate change policy instruments, they intend to create mechanisms that will allow the future use of carbon credits for marine and coastal ecosystem carbon capture and storage.
The critical role of oceans and their ecosystems has been overlooked, the agencies say. They aim to ensure oceans and coastal ecosystems are not neglected at the upcoming Rio+20 conference scheduled for June 2012. 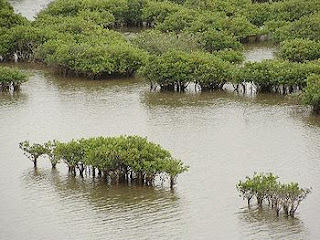 Mangrove forest on the coast of Yangjiang, Guangdong, China (Photo by Leo Zhu)
Their report emphasises that 60 percent of the world's major marine ecosystems have been degraded or are being used unsustainably, resulting in huge economic and social losses.
Mangrove forests have lost 30 to 50 percent of their original cover in the last 50 years while coral reefs have lost 20 percent, increasing the vulnerability of many highly populated coastal areas.
The ocean absorbs close to 26 percent of atmospheric carbon dioxide emissions. This is causing acidification of the oceans that is already threatening some varieties of plankton and poses a threat to the entire marine food chain and the human livelihoods that depend on the oceans and coastal waters.
"Some of these phenomena are not new but are aggravated by cumulative pressures such as climate change, intensified human activity and technological advances," the agencies said today.
"Ecosystems situated in the deep ocean, where biodiversity and habitats often have major value, but are generally not well understood, have virtually no protection at all."
The international community pledged to tackle these challenges at the United Nations summits in Rio in 1992 and Johannesburg (in 2002.
But the commitments made there remain ineffective and their objectives have not been met, the UN agencies acknowledge. Neither the pledge to restore fish stocks to sustainable levels by 2015, nor the promise to create networks of protected marine areas by 2012 have been met.
Few countries have adopted legislation to reduce land-based marine pollution,which has led to an increase in the number of dead ocean areas, the report finds. More than 400 marine areas have been listed as "biologically dead."
"The full implementation of many of these goals and targets will require further efforts by states, intergovernmental organizations and the international community," write the authors.
They claim the present situation is the result of insufficient political will and resources, inadequate institutional capacities, insufficient scientific data and market imbalances.
"Greening the Blue Economy will be science and technology driven," they conclude. "But success will depend on sound policy processes and effective institutional arrangements and will therefore require commitment and funding from the international community as well as nations and industry."
Available at:
http://www.unesco.org/new/fileadmin/MULTIMEDIA/HQ/SC/pdf/interagency_blue_paper_ocean_rioPlus20.pdf (2.2 mb)
Posted by Steven J Lutz at 8:15 AM 1 comment: