Grassroots organizations involved in coastal and marine conservation are invited to participate in UNEP/GRID-Arendal’s Blue Carbon Photography Contest. Selected photographs are intended for use in a special image-based publication for the United Nations Climate Change Conference in Durban, South Africa (COP17), and for an online image resource - the Blue Carbon Photo Library.
The theme of the contest “Life on the coasts - Blue Carbon” focuses on the importance of a healthy marine environment in coastal livelihoods.
UNEP/GRID-Arendal is looking for iconic images in two categories – People & the Environment, and Coastal & Marine Ecosystems. Examples include coastal and underwater scenes, community based restoration and conservation projects, our connection to healthy coastal ecosystems (e.g. fisheries, tourism), and how a changing ocean and climate impact the daily life of people and communities living along the coast.
As long as there is a clear affiliation with a grassroots organization, all professional and non-professional photographers worldwide are welcome to submit. Organization logos will also be highlighted in the special publication. Blue Climate Solutions has offered a digital underwater camera as a prize for the best image. Additional sponsors are welcome (click here).
INFORMATION
For Announcement and Competition Rules see:
http://www.grida.no/marine/activities/blue-carbon.aspx?id=4804
(see Photo Contest pages)
SUBMISSION
To submit your images, please see the Competition Rules and send all submissions to: photocontest@grida.no
Personal Release forms are required for all images that include recognizable subjects and children (see Competition Rules).
DEADLINE
The deadline for submitting pictures to UNEP/GRID-Arendal is SEPTEMBER 30, 2011.
Finalists will be announced in October 2011.
After reviewing the Competition Rules, you will be fully prepared to enter the contest.
Good Luck to everyone!
Posted by Steven J Lutz at 9:23 AM 1 comment:

Just yesterday, I was fortunate enough to attend a great presentation by Tundi Agardy on coastal ecosystem based management and a new guide produced by UNEP. Definitely useful for the blue carbon concept and recommended reading! Thanks Tundi, and all the other authors, and UNEP. -Steven
___________________________________ 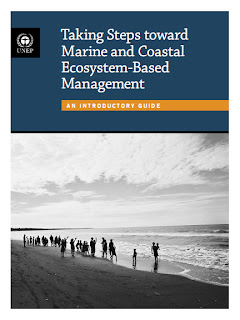 Taking steps toward marine and coastal ecosystem based management - An introductory guide by UNEP
http://www.indiawaterportal.org/node/18525
This guide by the United Nations Environment Programme (UNEP) seeks to assist countries and communities to take steps towards making marine and coastal ecosystem-based management operational, from strategic planning to on-site implementation. An important aim of this guide is to facilitate the implementation of UNEP’s overarching Ecosystem Management Programme and new Marine and Coastal Strategy in countries and regions in line with its Medium Term Strategy 2010-13.
Healthy marine and coastal ecosystems provide many valuable services ranging from food security, resources for economic growth and recreation alongside tourism and coastline protection. They are also recognized as crucial reservoirs of biodiversity at a time when the loss of species on both land and in the sea is an increasing cause for concern.
The Marine and Coastal Ecosystem-Based Management (EBM) guide outlines operational considerations in an accessible language, drawing upon practical experiences and lessons across the globe from tropical coastlines to temperate estuaries and polar ocean ecosystems. An important message is that this is an incremental process and there are different paths toward EBM. Cross boundary considerations and working with neighbours and even countries far away will be an essential component.
The target audience of the guide includes planners and decision-makers in local, national and regional governments and communities across a broad spectrum of interests and uses. The guide is not a technical manual or textbook. Rather, it is an introduction to EBM principles and applications, providing an overview of core elements and pathways to getting started. 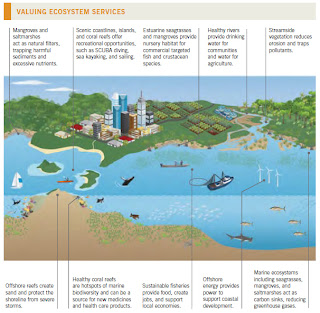 This guide is intended to complement UNEP’s work, such as the Green Economy, providing guidance on making changes in the way we interact with ecosystems, as well as the Blue Carbon Initiative, which explores the potential for mitigating climate change by investing and re-investing in healthy coastal ecosystems that capture and store carbon.
EBM offers a valuable solution for harnessing marine and coastal ecosystems in adapting to climate change and other potential disasters and can prove to be a valuable resource in assisting coastal countries and communities to move from theory to practical ecosystem-based management of oceans and coasts.
The guide is divided into the following chapters:
Introduction
Section I. Making The Case For Marine and coastal EBM
Section II. Examining the core elements of EBM
Section III: Moving toward EBM
Planning Phase: Chart the EBM Process
Implementation Phase: Apply and Adapt EBM
Concluding thoughts 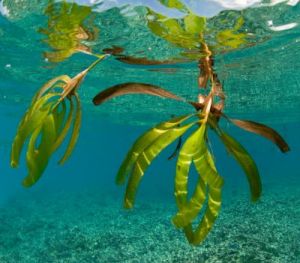