While widespread wetland destruction could unleash the mother of all "carbon bombs," scientists are discovering that the restoration of these vulnerable ecosystems could provide a valuable bulwark to climate change by creating a worldwide network of potent carbon sinks. A $12.3 million research project to capture and store carbon by growing tules and cattails in wetlands launched by the U.S. Geological Survey this summer has already shown some promising results, according to Environmental Science & Technology's Janet Pelley:

The USGS project has captured eye-popping amounts of carbon—an average of 3000 grams of carbon per square meter per year (g-C/m2/yr) over the past 5 years. For comparison, reforested agricultural land, eligible for carbon credits under the Kyoto Protocol on climate change, socks away carbon at a rate much less than 100 g-C/m2/yr, says Gail Chmura, a biogeochemist at McGill University (Canada).

Saltwater marshes provide biggest cooling potential
The USGS researchers determined that saltwater marshes provided the most bang for the buck. Wetlands are great at storing carbon dioxide because of their near-constant water cover, which prevents oxygen from entering the muddy soil; this effectively keeps bacterial decomposition, a process which releases a lot of CO2 (this is one of the reasons why permafrost thawing is so worrisome), to a minimum.

In fact, unperturbed wetlands are so effective that their peat soils can sometimes be 60 ft deep and over 7,000 years old. The project, which started out in California's Sacramento-San Joaquin River Delta, will be expanded to determine whether the restored wetlands can help regain the land elevation lost when the delta island was drained a century ago and to see whether "wetland carbon credits" could be sold on the state's upcoming carbon market.

Concerns remain over methane release
This all sounds well and good, but some scientists are urging caution, pointing out that the project has yet to provide reliable figures for the amount of methane emissions being released. Though they may not cancel out the beneficial cooling effects of the wetlands' carbon storage, the emission levels could still be relatively significant -- especially on a large scale.

One reason for concern, according to University of Florida biogeochemist Ramesh Reddy, is that the same low oxygen to anoxic conditions that favor carbon storage also favor the release of methane. Even if the bacteria can't access oxygen, they can use iron oxides, CO2 or sulfate as sources of electron acceptors. Using CO2 produces methane emissions.

This makes saltwater marshes all the more appealing, says Chmura:

Because saltwater is high in sulfate, microbes in saltwater marshes don’t have to use CO2 as an electron acceptor, and therefore they produce negligible amounts of methane, Chmura says. She estimates that North American salt marshes sequester an average of 210 g-C/m2/yr. These hefty rates, along with an ability to accrete carbon faster as the sea level rises, make saltwater marshes ideal sites for restoration and carbon storage, she says.

Restoring ecosystems and naturally sequestering carbon dioxide? Sounds like a plan. Kudos to Florida for getting the ball rolling on what will (hopefully) be an international trend in the coming years.

Via: ES&T: Can wetland restoration cool the planet?

More about wetlands
Destruction of Wetlands Could Unleash a "Carbon Bomb"
Florida to Buy Back Wetlands from U.S. Sugar
Wetland ‘Carbon Bomb’ Has One of Its Wires Cut: Democratic Republic of Congo Creates World’s Largest Protected Wetland 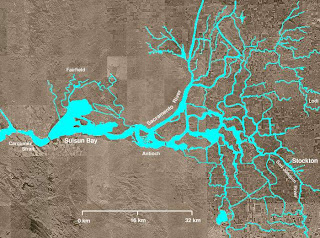 The Sacramento-San Joaquin River Delta covers the right half of this image. Matthew Trump created this image, Wikimedia Commons, under the terms of the GNU Free Documentation License, Version 1.2
Posted by Steven J Lutz at 3:27 PM 1 comment: