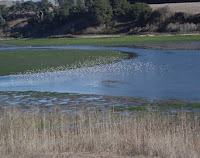 Did you know that healthy tidal wetlands can actually help us fight climate change?

The Elkhorn Slough Tidal Wetland Project (Moss Landing, CA) received $3.9 million in federal stimulus grant funds in July of last year. The project aims to restore potentially 1000 acres of salt marsh ecosystem, an area which has been lost to unsustainable development and erosion. The project is also expected to create 132 local jobs.

Coastal restoration projects like this one should be supported and expanded because they create jobs, restore the environment, and counter climate change.

A healthy South Florida for a healthy planet 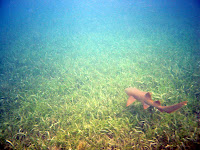 Did you know that a healthy Biscayne Bay can actually help us fight climate change?

When healthy, coastal and marine ecosystems such as seagrass meadows, mangrove forests, and saltwater marshlands absorb carbon dioxide, the leading cause of climate change, and help mitigate this global threat.

Recent reports find that these ecosystems, all found in and around Biscayne Bay and throughout South Florida, are more effective at storing carbon than terrestrial solutions, such as restoring forests.

Conserving our coastal marine ecosystems may also be worth money. Congress is currently considering legislation that could direct billions of dollars towards carbon mitigation activities.

If we can advance policies that appreciate the natural carbon roles our coastal and marine ecosystems play, then their restoration and conservation could potentially create economic stimulus and become a source of increasing revenue for our coastal cities and our state.

In fact, many current South Florida coastal restoration activities may actually already be helping us fight climate change. Potential local projects that come to mind include the restoration of the Everglades and Virginia Key, the Miami Science Museum’s Reclamation Project, and efforts to clean up southeast Florida sewer outfall pipes.

Projects like these should be supported and expanded because they create jobs, restore the environment, and counter climate change. A healthy Biscayne Bay is also vitally important to local tourism and fisheries, including lobster and stone crab fishing.

The call for marine conservation solutions is part of a new and increasing movement. In November of last year, the Blue Climate Coalition, a large alliance of environmental groups, scientists, and other interests, issued letters to President Obama and the U.S. Senate asking for marine conservation options to be included in climate change legislation and international treaties. Many South Florida groups signed the coalition letters, including Blue Climate Solutions, Friends of the Everglades, Save the Manatee Club, Urban Environment League, Urban Paradise Guild, Reef Rescue, and Cry of the Water.

After the recent Copenhagen climate talks, the eyes of the world will turn to the United States for direction on climate change. Marine conservation options represent an opportunity for our nation to play a leading role in countering this global threat.

Those interested in joining the call for marine conservation solutions to climate change should contact their congressional representatives and let their voice be heard.

For more information and how to join the call for ‘blue’ climate solutions:
http://sites.google.com/site/blueclimatesolutions/home
(Click-on ‘Citizen Action Alert’)

Echinoderms have been found to be a major part of the global carbon sink.

So where does the carbon come from that these bottom dwellers consume, repackage, incorporate, and store? Directly from the seawater? How about what they eat?

Where else can we expect to find carbon accumulated on the sea floor?

"...sea cucumbers... are by far the most abundant large animals on the sea floor... Another large proportion are sea stars. All belonging to echinoderms, watery creatures with few muscles. Their fairly extensive calcareous skeletons contains most of the weight of the animal."

"Sea stars grow relatively abundantly on sea floors all over the world. Shallow-water sea stars scavenge carnivorously, as do most deep sea stars. But one group of broad, stubby-armed animals from the deep eats mud in a manner of its cucumber relatives. It is peculiar in lacking either an intestine or anus so must void exhausted mud through its mouth. The brittle stars, which seem to row across the bottom on agile arms, also lack intestine and anus. Spiny sea urchins crawl about everywhere, in deep as well as shallow oceans."

Food for thought. See the following article, also at:

Starfish Suck Carbon From the Sea

Have we factored in carbon sequestration as bones and shells of larger creatures?

The impact on levels of carbon dioxide in the Earth's atmosphere by the decaying remains of a group of marine creatures that includes starfish and sea urchin has been significantly underestimated.

"Climate models must take this carbon sink into account," says Mario Lebrato, lead author of the study. The work was done when he was at the National Oceanography Centre, Southampton (NOCS) and affiliated with the University of Southampton's School of Ocean and Earth Science (SOES); he is now at the Leibniz Institute of Marine Science in Germany.

Globally, the seabed habitats occupy more than 300 million million square metres, from the intertidal flats and pools to the mightiest deep-sea trenches at 11,000 meters. The benthos – the animals living on and in the sediments – populate this vast ecosystem.

Calcifying organisms incorporate carbon directly from the seawater into their skeletons in the form of inorganic minerals such as calcium carbonate. This means that their bodies contain a substantial amount of inorganic carbon. When they die and sink, some of the inorganic carbon is remineralised, and much of it becomes buried in sediments, where it remains locked up indefinitely.

Lebrato and his colleagues provide the first estimation of the contributions of starfish, sea urchins, brittle stars, sea cucumbers and sea lilies – all kinds of echinoderm – to the calcium carbonate budget at the seabed. They estimate that the global production from all echinoderms is over a tenth (0.1) of a gigatonne of carbon per year – that is, more than a hundred thousand million kilograms.

This is less than the total biological production in the main water column, or pelagic zone, which scientists believe to be between around 0.6 and 1.8 gigatonnes of carbon per year. But echinoderms apparently deliver more carbon to the sediments than do forams, for example. These microscopic animals live in vast numbers in the oceans and are traditionally regarded along with coccolithophores (single-celled marine plants surrounded by calcium carbonate plates) as one of the biggest contributors to the flux of calcium carbonate from the sunlit surface waters to the ocean's interior – the so-called 'biological carbon pump'.

"Our research highlights the poor understanding of large-scale carbon processes associated with calcifying animals such as echinoderms and tackles some of the uncertainties in the oceanic calcium carbonate budget," says Lebrato: "The realisation that these creatures represent such a significant part of the ocean carbon sink needs to be taken into account in computer models of the biological pump and its effect on global climate."

There is a worry that ocean acidification due to increased carbon dioxide emissions from the burning of fossil fuels could reduce the amount of calcium carbonate incorporated into the skeletons of echinoderms and other calcifying organisms.

However, different echinoderm species respond to ocean acidification in different ways, and the effects of rising temperatures can be as significant as those of rising carbon dioxide. How this will affect the global carbon sink remains to be established.

Lebrato concludes: "The scientific community needs to reconsider the role of benthic processes in the marine calcium carbonate cycle. This is a crucial but understudied compartment of the global marine carbon cycle, which has been of key importance throughout Earth history and it is still at present."

A blue carbon blog from Dave Helvarg, President of the Blue Frontier Campaign. Thanks Dave!

We could still turn the tide and avoid the worst impacts of climate change if we mobilized allied nations as we did in World War Two. Instead the recent UN Summit in Copenhagen suggests we're treating our greatest global threat like the invasion of Grenada. One of the few solid agreements to come out of the talks was for the establishment of a multibillion-dollar fund to reduce deforestation. The burning and clearing of forest is the second largest source of human-generated carbon after the burning of fossil fuels. A recent UN report on "Blue Carbon" suggests that funding needs to be expanded to protect carbon sequestering coastal habitats, specifically mangroves, salt marshes and seagrass meadows that also function as the nurseries, filters and storm barriers of the sea. Sea turtle hatchlings need healthy coastal and marine ecosystems in order to survive. It just so happens that we also need the same healthy ocean ecosystems to survive on this blue planet," notes coral scientist Steven Lutz who's organized an international 'Blue Climate Coalition' working to bring the Blue Carbon discussion into the mainstream of policy and action.

For a more detailed story on this see my "Blue Bayou Climate Solution" in Huffington Post at: http://www.huffingtonpost.com/david-helvarg/the-blue-bayou-climate-so_b_388065.html