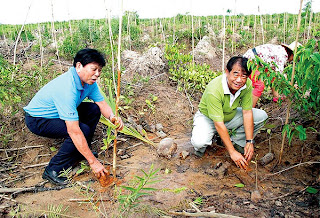 Prof Dr Sanit Aksornkoae (left), a director and acting president of the Thailand Environment Institute, plants mangrove seedlings with Kantanit Sukontasap, vicepresident for group communications at Siam City Cement, a business partner of the project.
Located just a few kilometres from Krabi town, Koh Klang, with fewer than 5,000 people, was recently selected by the Thailand Business Council for Sustainable Development (TBCSD) to be turned into a "carbon capture and storage island", part of moves to turn Thailand into a low-carbon economy.
Through partnerships between business organisations, local communities and the Thailand Environment Institute (TEI), the "Blue Carbon Storage" project involves planting and rehabilitating 3,000 rai of mangrove area or "walking forests" for the capture and storage of carbon dioxide (CO2).
Prof Dr Sanit Aksornkoae, a director and acting president of the TEI, said it would take three years to develop the entire programme including six months to measure existing carbon dioxide levels and estimate how much can be reduced on the island.
"Blue carbon storage is similar to green carbon storage, which involves land forests, except higher amounts of CO2 are stored," he said.
Given Thailand's 2,700 km of coastline, some 100 million tonnes of greenhouse gases (GHGs) could be stored annually in coastal forests compared with 40 million a year for green or land forests.
For example, seagrass can store 1,130 kilogrammes per rai per year, while seaweed is good for more than 2,000 kg per rai per year.
Thailand's more than 200 varieties of coral reefs can manage 1,800 kg of GHGs per year, with plankton storing about 1,500 kg.
By comparison, Prof Dr Sanit said land forests can generally capture 1,300 kg of GHGs per rai per year.
Thailand's mangrove area has declined from 2.3 million rai to 1.5 million in recent years, with more than 400 sq km eroded.
Most of this forest area stretches along the Gulf of Thailand, on which the country's coastline runs for 1,900 km compared with only 800 km for the Andaman coast.
"Ineffective and improper use of natural resources have resulted in continuous declines in mangrove forest area and aquatic animals," said Qwanruedee Chotichanathawewong, a TBCSD executive director and TEI vice-president.
"The loss of mangrove forest means Thailand is losing lots of carbon storage area, thereby contributing to accelerated climate change."
For an agricultural country such as Thailand, climate change can mean lower crop yields due to higher temperatures, increased drought and reduced biodiversity.
The TEI says Thailand emits 359 million tonnes of GHGs annually, mostly from the energy sector.
Other partners in the project include the Electricity Generating Authority of Thailand and Siam City Cement Plc along with Islanda Eco Village Resort, the only participating resort on Koh Klang and which educates local people and tourists alike about the project.
Pimrapee Phanwichatikul, who opened Islanda almost three years ago, said the resort will eventually distribute mangrove seedlings to tourists so they can participate in planting the seedlings on the island.
"We need help from academics and researchers regarding care of the seedlings, while resort staff can coordinate with the villages," said Ms Pimrapee, who is also the vice-president for sales and marketing at the Maritime Park and Spa Resort in the province.
"Koh Klang villagers can earn extra income by planting and taking care of the seedlings."
She said that by limiting tourist numbers, Koh Klang can prevent the garbage problems experienced by other resort islands in the country.
Posted by Steven J Lutz at 10:58 AM 2 comments: 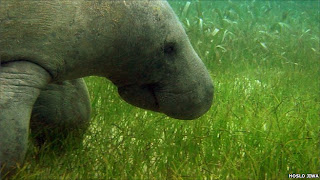 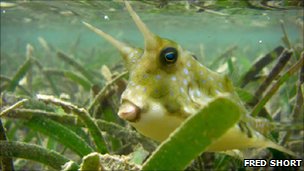 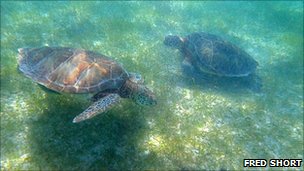 Green turtles swimming over seagrass Green turtles depend on the green grass
"Unfortunately, being submerged in the ocean they are rarely directly seen except by swimmers or snorkelers."
Posted by Steven J Lutz at 8:24 AM 2 comments: 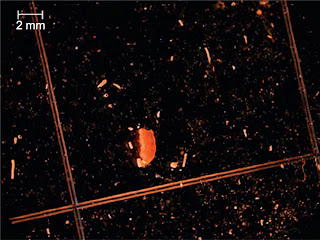