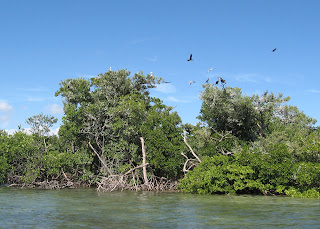 http://www.reuters.com/article/idUSTRE6AN0YH20101124
Wed, Nov 24 2010 By Patrick Rucker
CANCUN, Mexico (Reuters) - This famous beach resort, which will next week host international climate change talks, was itself born from the destruction of a potent resource to fight global warming.
Thick mangrove forests lined the canals and waterways here before developers dredged the land to make way for the upscale hotels that now draw several million tourists every year.
In the 40 years since Cancun was founded, countless acres of mangrove forests up and down Mexico's Caribbean Coast have been lost -- and the destruction continues.
Now many scientists say that mangrove forests can help slow climate change, and are desperate to save them.
"We still have a lot to learn but the potential is huge for mangroves," said Gail Chmura, a climate change researcher at McGill University in Montreal who studies how much carbon is stored in these knobby, tidal forests.
As they process sunlight into food, mangroves suck an uncommon amount of industrial carbon out of the atmosphere and bury it deep within their underground network of roots.
As nations looks desperately for "carbon sinks" that can capture and store carbon linked to climate change, mangroves are increasingly seen as a resource worth saving.
The United Nations may soon pay countries to set aside mangroves and sea plants that sock away carbon and those same reserves could mean long-term cash under a global carbon cap and trade scheme.
With that plan, polluters would buy, sell and swap their right to burn carbon fuels under new emissions rules.
Breathing life into that carbon market is a key goal of climate talks among almost 200 nations meeting in Cancun from November 29 to December 10. The meeting is a follow-up to the December 2009 Copenhagen summit which disappointed many nations by falling short of a binding treaty to slow global warming.
COST-BENEFIT TALLY
Climate experts argue that the long-term benefits of conservation will outweigh the short-term gains of development at every turn. In Mexico and around the world, though, the arguments for development usually win.
"There is more profit in tourism than conservation," said Alfredo Arellano, the local director of the Commission for Protected Areas who notes that Mexico loses nearly 25,000 acres or 1 percent of its mangroves annually.
Hotels and beach resorts have been spreading across the areas surrounding Cancun since planners began turning a desolate sandbar into a tourist hot-spot in 1970.
The resort area is now a top destination for U.S. sun-seekers drawn to its white-sand beaches and raucous party scene. Tourism officials expect the area to absorb more than $4 billion in foreign cash this year.
The flow of tourist dollars is simply more bankable than the possible, future income from saving the mangroves.
"Carbon markets are too underdeveloped to create an appetite for conservation," Arellano said. "I hope that changes before it's too late."
Besides their power to sponge up carbon, mangroves serve as fish nurseries and buffers for devastating ocean storms -- a worth that ecologists say is lost in a short-term tally of the land's value.
In Southeast Asia, home to a third of the world's remaining mangroves, shrimp farmers covet the rich, silty estuaries where those forests thrive.
A Thai farmer can rely on government subsidies to pocket $1,220 a year by converting 2.5 acres of mangrove into a shrimp farm but the land will be so depleted after five years that it will cost more than $9,000 to restore, according to a report sponsored by the United Nations. The knock-on expense of lost fish habitat and a vulnerable coastline will top $12,000 a year, the study concludes.
"We are only now getting a glimpse of the true value of the world's natural systems," said Nick Nuttall, spokesman for the U.N. Environment Programme which is calculating the bottom-line worth of many fragile ecosystems.
While mangroves in Asia have been chipped for scrap wood and West African mangroves are commonly burned to extract salt from seawater, the marine forests of Mexico are routinely flattened for tourism.
Cancun is now home to about 600,000 people, and officials are seeking bids for an international airport about 100 km (60 miles) to the south near the seaside town of Tulum where mangroves are still abundant.
Rene Gonzalez, a local guide, often takes visitors from that quaint tourist town deep into the adjacent Sian Ka'an nature reserve that covers 1.3 million acres of brackish marsh, grassland and estuaries.
"Thirty five years ago, Cancun looked exactly like the biosphere is today," Gonzalez said of Sian Ka'an, a United Nations' World Heritage Site.
Gonzalez says he has lived in eastern Mexico long enough to know that tensions between conservation and development almost always end in tree stumps and asphalt.
"It's working its way down," Gonzalez said of development, while zooming around in a flat-bottomed boat through Mayan trading routes carves through the mangroves. "It won't take forty years for them to make another Cancun."