Deep Sea News published a guest post relating the experience of an oil spill in a mangrove area on the Caribbean Island of Curaçao. In her post, Dr. Kristen Marhaver shares her thoughts on the impacts of oil on mangrove ecosystems. According to Kristen, following bad wind conditions caused by the tropical storm Isaac, oil from a storage tank at Curaçao's Isla Refinery was pushed into a mangrove forest, severely contaminating habitat and wildlife. Kristen is a Postdoctoral Scholar at the University of California at Merced, studying coral reefs on Curaçao. 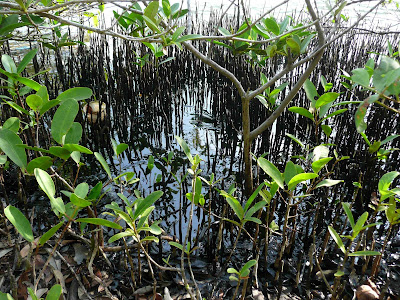 "An oil spill in the news is an abstract thing. Though I had seen photos from the Exxon Valdez spill and video from the Deepwater Horizon blowout, I hadn’t prepared to be so deeply insulted by an oil spill in person. Crude oil is the blackest black there is. In a shallow bay in the hot Caribbean sun, it had formed greasy pavements and tar balls almost impossibly goey. It shellacked anything it touched – animal, mineral, or vegetable. I watched a painted-black crab stumble across the ground. Tar balls bobbed between paved-black rocks and the dense underwater branches of mangrove trees, where juvenile fish usually hide from predators. The mangroves’ thin root-like breathing structures poked up above the water surface, slimed with crude and certainly clogged. The arboreal version of black lung. A flock of five flamingos took flight, with black patches on wings where they didn’t belong."
____________________________