Save a Whale - Save the Planet

17 Oct 2010 | Miami FL -- Many thanks to Samantha Whitcraft, of Oceanic Defense, and Cynthia Aguilar, of KeepPaddlin.org, for hosting a fantastic oceans event last night.
The “One Person Can Make A Difference For Our Oceans” celebration-fundraiser, was a great opportunity to meet leading environmental advocates working together to protect our oceans.
The event was held at Florida Room of the Delano Hotel on Miami Beach. Featured speakers included Samantha, Cynthia, Shelby Proie of SaveLolita.com, and Captain Pete Bethune - a marine conservation VIP - featured on Animal Planet’s Whale Wars series, captain of Earthrace, and formerly with Sea Shepard Society.
Pete was in town for an ocean education and activation weekend, which included a dolphin conservation rally and a Community Forum at the University of Miami’s Rosenstiel School of Marine and Atmospheric Science (RSMAS). 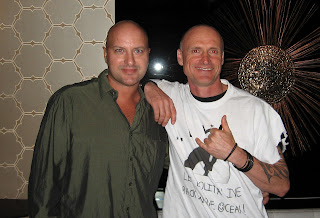 Whale carbon discussed with Captain Pete Bethune, of Animal Planet’s Whale Wars series (right). Steven Lutz, of Blue Climate Solutions (left).
I had an opportunity to chat with Pete at the Community Forum and at last night’s celebration-fundraiser. We discussed the value of whale conservation as climate change mitigation. Pete is heavily involved in the conservation of whales and it looks like his work may also help counter climate change:
Whale Carbon - New research, from Canada and the US, points to the potential role that the conservation of whales and large fish can play as part of the solution to climate change.
The researchers found that carbon naturally accumulates in the bodies of whales, and that this carbon is sequestered - out of the atmosphere - for the life time of the animal. Individual whales can store a lot of carbon, amounts only exceeded by the largest trees. Those that die natural deaths - not whaled - transport their carbon to the ocean depths, away from the atmosphere, and thereby helping to mitigate climate change.
The over fishing of whales and large fish reduces the amount of carbon stored in these populations and lessens the ocean’s capacity to mitigate climate change. Conversely, if we restore whale populations we are also restoring the ocean’s natural carbon function. According to the researchers:

Rebuilding the blue whale population of the southern hemisphere would sequester the same carbon as preserving 43,000 hectares (166 square miles) of temperate forest, about the size of Los Angeles. 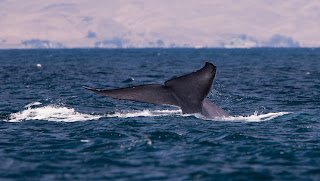