Mangroves: Save the ‘carbon sinks’ instead of letting them go down the drain, say experts

Mangroves: Save the ‘carbon sinks’ instead of letting them go down the drain, say experts
http://tribune.com.pk/story/140055/mangroves-save-the-carbon-sinks-instead-of-letting-them-go-down-the-drain-say-experts/
By Samia Saleem, Published: March 31, 2011 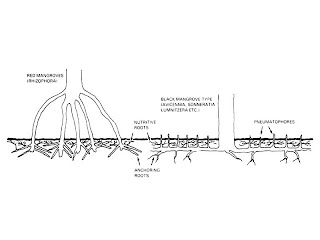 Schematic diagram of the rooting systems of the two major types of mangrove. IMAGE: ROYAL SWEDISH ACADEMY OF SCIENCES
KARACHI: Mangroves can serve as lungs for Karachi, where the scope of forestry is already very limited, said experts.
Around the world, environmentalists are now focusing on the role of mangroves as carbon sinks besides their ecological usefulness, natural beauty, ability to filter pollution, house fish nurseries and buffer shorelines against storms.
International Union of Conservation of Nature (IUCN) climate change expert Saadullah Ayaz said that studies have shown that about one acre of mangrove plantations roughly capture 0.7 tons of carbon dioxide every year. Mangroves can thus be used as tools to control the environment and the population. Also, unlike terrestrial vegetation, they don’t cover very large areas, he said.
Studies show that mangroves, salt marshes and sea grasses soak up to five times more carbon than tropical forests. An article published this month in the ‘American Scientific’ calls mangroves as ‘blue carbon’. These previously undervalued coastal carbon sinks are beginning to gain attention from conservation communities because of their littoral environment that is close to the shore, said the article.
Ayaz said that although climate change is a global phenomenon in which Pakistan has a much smaller contribution in comparison, mangroves can still hold enormous amounts of carbon dioxide emissions from factories in the city. Pakistan’s contribution to global climate change is about 0.4 to 0.8 per cent of global emissions versus the largest contributor, the United States, which releases 24 to 27 per cent of the total emissions, according to a task force report on climate change 2010 by the Planning Commission of Pakistan.
In an industrial city, such as Karachi, where both combustion and breathing — the two major contributors to carbon dioxide emissions — are in high density and the scope of forestry and plantations is low, these plants can serve as mitigating agents of pollution, said Ayaz.
IUCN expert on mangroves Tahir Qureshi said that the vast coastal jungles of mangroves on our coastline in Sindh and Balochistan can also be used to improve the forest wealth of Pakistan. According to him, Pakistan is already on the list of the countries that don’t have enough forests and wildlife. “These coastal plants not only contribute to marine diversity and ecosystems but also attract land biodiversity,” he said. Just like trees on land, mangrove forests can help rejuvinate the ecosystem, catalysing the ecological balance and increasing the flora and fauna.
“These spindly shrubs that thrive on the interface between land and sea, attract birds, animals and insects, their wood can be used for timber, the leaves for animal fodder, and they can hold soil, preventing soil erosion,” he said.
According to the Pakistan climate change report, the forest cover for Pakistan is expected to increase from 4.9 per cent of the total land area in 2005 to 5.2 per cent in 2010 and six per cent by 2015.
Since mangroves hold so much carbon, destroying mangroves also releases substantial amounts of carbon dioxide gas, which is why protecting the coastal habitat of mangroves is all the more important. “Our resources are being wrecked through aquaculture, agriculture, timber extraction and real estate development,” said Qureshi.
Mangrove forests that spanned over 600,000 hectares till 1950 have shrunk to 86,000 hectares now, which is a major concern, he added.
Published in The Express Tribune, March 31st, 2011.
Posted by Steven J Lutz at 7:22 AM