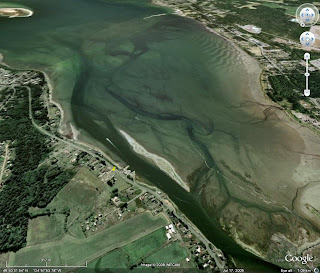 The Courtenay River Estuary is the largest estuary found on Vancouver Island (Image courtesy Sierra Club BC).
The Courtenay River Estuary could hold a blue key that locks in carbon dioxide from the atmosphere, Comox Valley Regional District directors heard on Tuesday.
Paul Horgen, chair of Project Watershed, said local governments would have to start paying money to the province in the form of 'carbon offsets' from next year.
But his group saw an opportunity to spend that money on estuary restoration work here.
He sought support for a pilot project to investigate the potential for 'blue carbon' capture through the extensive restoration of eel grass beds and sedges in salt marsh riparian zones.
Research elsewhere has suggested that such plants were 90 times more effective than trees in absorbing the gas.
The plants stored it, and when the died back - as they did several times a year - and the vegetation rotted into the mud, the absorbed carbon dioxide was locked away for good, and in the far distant future would eventually become coal.
Horgen hoped it would be possible to persuade the province to divert $100,000 of the carbon offset payments it would be receiving to fund a hands-on pilot project here in the local estuary.
That would not only measure the effectiveness of carbon capture, possibly providing a model for many other north American estuaries, but also see the extensive replanting of eel grasses and sedges employing young people in the process.
It was, he suggested, a win-win, because even if the intensity of capture could not proved - although he believed it would be - the replanting project would help restore the estuary to its former abundance with big salmon returning as they did in the 1950s.
Regional district directors liked the idea and are now recommending the full board supports the project.
They are proposing the province be asked if they will allow local governments to invest their carbon off-set payments in blue carbon projects, such as the Courtenay River Estuary pilot project, rather than just sending the money to Victoria for undetermined use.
They will also suggest the Union of British Columbia Municipalities take up the issue, as it could be relevant to many other coastal areas.
Posted by Steven J Lutz at 3:58 AM