Mangroves of Fiji - Blue Carbon and other Ecosystem Services 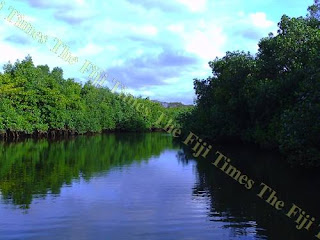 Mangrove trees catch sediment from the river to build a base for their roots.
How would you describe a mangrove forest? Muddy, smelly, and mosquito-infested?
The land's not suitable to build on, the fish are small, refuse collects in the tangled web of roots that keep trying to trip you like a cartoon character, stunted shoots cut and scratch at you and it's impossible to navigate without years of experience or a compass. These are perhaps the reasons for Fiji's mangrove area declining by 13% between 1978 and 1994.
However contrary to popular belief mangrove forests are actually extremely productive and biodiverse ecosystems - linking the land to the sea they prevent debris from washing onto reefs, absorb and store the greenhouse gas carbon dioxide, and act as nursery grounds for commercially important fish including rabbitfish (nuqa), bumphead parrotfish (kalia) and many shark (qio) species.
The mangrove corridor to the Great Sea Reef
There is a close connection between mangroves and the Great Sea Reef, the third longest reef in the southern hemisphere, hugging the entire northern coast of Vanua Levu. Those in the NGO business often consider the Great Sea Reef to be "the hidden gem" of the South Pacific with its globally significant biodiversity, 12 IUCN Red Listed species including the green turtle, humphead wrasse and manta ray, as well as its sheer length.
The Great Sea Reef's health is in large part dependent on that of its mangrove corridor which fringes the Labasa River from hilltop to river mouth before the river water flows on to the reef. Mangroves roots - those extensive, tangled masses - trap particles from the river, so that the tree in effect builds an environment for itself from which it can obtain nutrients and anchor its roots.
By trapping particles, mangroves clarify and purify the water, creating that wondrously clear aquamarine water essential for coral reefs to receive sunlight and flourish; and by absorbing excess nutrients they prevent algae enshrouding the slow-growing coral.
Recent scientific evidence following the 2004 Boxing Day Aceh tsunami indicates that mangroves are also effective buffers for the shore when cyclones and tsunamis strike; fewer lives are lost and less damage is caused in communities with broader mangrove belts, earning them the nickname "bioshields".
Putting a plaster on a gaping wound
With lives and livelihoods lost in the furious flash floods that strike Labasa year after year, in 2008 it was decided to dredge the Labasa River, which flows directly through the centre of the town. Floods have always been a problem in Labasa, which is unsurprising considering it sits straddling three rivers in a flat, low-lying estuary that used to be a swamp.
For those who are not familiar with the term, dredging is the process of excavating the sediment lying at the bottom of a river bed to deposit it somewhere else, which at least in the short term deepens the water channel so it can carry a larger volume of water at any one time.
So what's the problem? Environmental group the WWF (World Wide Fund for Nature) have recently been speaking out about the impact dredging is having on the surrounding mangroves.
"Unfortunately, the act of dredging to deepen the channels and river mouth is in this case creating a false sense of security with the dredging's capacity to do more harm than good." Ms Monifa Fiu, Building Resilience Officer at WWF South Pacific commented.
"The way dredging is currently being conducted in the Labasa river just now, the material or 'spoil' that is dredged from the bottom of the river is being dumped in the first line of mangroves on the river bank, killing them."
"My fear is that as storm frequency increases due to climate change, we will have to dredge much more often, progressively destroying the layers of mangroves that line the bank."
Ms Fiu noted these dead patches on a field trip assessing the vulnerability of these mangroves to climate change as part of the major new AusAID funded 'Building Resilience' project, which aims to strengthen the resilience of the Ba and Labasa river catchments to the effects of climate change. The patches were of mature black mangroves (dogo) - a species of particular note for their protection and stabilization of low-lying coastal areas. In short, their message is clear: In Fiji we gain so much from mangroves that we cannot afford for them to be damaged as a result of poor planning. Mangrove build, mangroves protect, mangroves host and mangroves provide.
Posted by Steven J Lutz at 5:18 AM