Despite its critical role in reducing climate change, Blue Carbon is a relatively unknown term to many people.

Struan Stevenson, a Conservative Party MEP for Scotland and president of the European Parliament's climate change, frequently draws attention to the importance of Blue Carbon sinks and in this article he addresses the issue of the increasing loss of Blue Carbon habitats due to ongoing and planned wind farm development in Scotland. 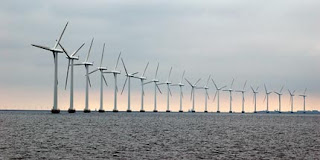 12 April 2012 / Struan Stevenson / Public Service Europe - The role played by forests and peat bogs in capturing and storing carbon is well-known. We call this 'green carbon'. But now, there is increasing awareness and attention being paid to the crucial role of our oceans and marine ecosystems in maintaining our climate. Around 55 per cent of all the biological carbon captured in the world is sequestered by marine living organisms in the sea. This is 'blue carbon'.

Every day, we add a further 22 million metric tonnes of carbon dioxide to our oceans. That is why maintaining and improving the ability of our oceans to capture and store carbon is of vital importance to human survival. We can no longer afford to overlook the critical role of our oceans. Without the essential ecosystem service they provide, climate change would be far worse. Seagrass meadows also provide an important habitat for shellfish and finfish and help maintain biodiversity, water quality and prevent coastal erosion. Their presence and abundance is therefore a good measure of the environmental quality of the entire coastal zone.

Recent research has indicated that a tiny part of the marine environment – the mangrove swamps, salt marshes and seagrasses that cover just 0.5 per cent of the seabed – account for the capture of at least half, and maybe three-quarters, of this blue carbon. They are our blue carbon sinks and keeping them in good shape could be one of our most important undertakings to control climate change. While most mangrove swamps are in the tropics and subtropics, the United Kingdom possesses large areas of the other blue carbon stores with its seagrass meadows and salt marshes. Government agency Scottish National Heritage has noted that the vast majority of the UK's seagrass meadows are located in Scottish waters, accounting for some 20 per cent of Europe's total.

Groups such as the International Union for Conservation of Nature and Conservation have highlighted that seagrasses around Scotland are most likely to occur in very shallow coastal waters, probably less than five metres in depth, because of the relatively low water clarity of oceans at higher latitudes. So, while blue carbon experts have previously assumed that offshore turbine developments are built in deeper waters and away from the sandbanks where seagrasses thrive, it is now clear that this is not the case.

Offshore wind farms will also affect salt marshes. Saltmarshes are vegetated parts of the upper intertidal area found on our enclosed shores and Scottish saltmarshes make up 15 per cent of the total British resource. Scotland's largest areas of saltmarsh are located in two main areas: the Solway Firth and the Moray Firth. Yet, despite the importance of these natural resources, both locations are key locations for wind farm planners.

The Solway Firth is currently home to Robin Rigg wind farm, Scotland's first offshore wind development which was completed in April 2010. Solway Firth now houses 100 turbines in a depth range of between four and 23 metres within a 59 kilometre squared area, even though Scottish ministers agreed that "the Solway Firth and Wigtown Bay sites are unsuitable for the development of offshore wind and should not be progressed as part of this Sectoral Marine Plan".

At present, a number of developers are preparing applications to site huge wind farms in the Moray Firth development area as the Scottish Government has noted that the region "has favourable conditions and significant potential for the development of offshore wind both within Scottish territorial waters and beyond into Scottish offshore waters". The government does not mention either saltmarshes or seagrasses in its "sectoral marine plan for offshore wind energy in Scottish territorial waters', though they do note that there are potential adverse effects on bottlenose dolphins.

Despite its importance, blue carbon is still a relatively unknown issue. The message to policy-makers is clear - we cannot afford to sanction the continued destruction of our remaining blue carbon habitats merely to fast-track wind farm development. Blue carbon sinks are far more effective in the battle against climate change than turbines can ever be and it is time they received full protection.
_________________________________

Struan Stevenson is a Conservative Party MEP for Scotland and president of the European Parliament's climate change, biodiversity and sustainable development intergroup.
Posted by Sven Stadtmann at 7:47 AM