Blue Carbon side event at Rio+20 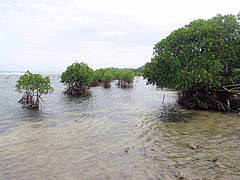 23 April 2012 / UNESCO - The 2012 UN Conference on Sustainable development (Rio+20) is an opportunity to set a new agenda for a sustainable future. As delegates meet in New York for the second round of informal negotiations on the zero draft of the Rio+20 outcome document, a side event was organized to inform them of the potential value of coastal ecosystem conservation through blue carbon initiatives, as a means to ensure long term sustainability of coastal areas and green economic development whilst effectively mitigating climate change.

Ecosystem services provided by coastal and marine habitats are of crucial importance for food security and poverty eradication, as well as many of the sectors currently driving the economies of coastal nations.

Some of these ecosystems, such as mangroves, salt marshes and seagrass meadows, beyond having high biodiversity values and providing breeding grounds and nurseries for fisheries, can also play a key role in mitigating global climate change through their ability to store carbon.  Anthropogenic carbon emissions in the atmosphere and oceans are the most significant cause of global climate change. Curbing climate change means both removing carbon from the atmosphere and oceans and avoiding new carbon emissions.

Total carbon deposits per square kilometer in these coastal systems may be up to five times the carbon stored in tropical forests, due to their ability to absorb, or sequester, carbon at rates up to 50 times those of the same area of tropical forest.

These Blue Carbon ecosystems are being degraded and destroyed at a rapid pace along the world’s coastlines, resulting in globally significant emissions of carbon dioxide into the atmosphere and ocean and contributing to climate change. Draining a typical coastal wetland, such as a mangrove or marsh, releases 0.25 million tons of carbon dioxide per square kilometer for every meter of soil that’s lost.  Global data shows that seagrasses, tidal marshes, and mangroves are being degraded or destroyed along the world’s coastlines at a rapid pace. In fact, between 1980 and 2005, 35,000 square kilometers of mangroves were removed globally – an area the size of the nation of Belgium.

There is growing evidence and consensus that the management of coastal Blue Carbon ecosystems, through avoided emissions, conservation, restoration and sustainable use has strong potential as a transformational tool in effective global natural carbon management. Scientific understanding of carbon sequestration and potential emissions from coastal ecosystems is now sufficient to develop effective carbon management, policy, and conservation incentives for coastal Blue Carbon.

With appropriate and timely action through the Rio+20 negotiating process, increased recognition of the importance of coastal Blue Carbon systems will leverage improved management and regulation of coastal areas and provide a basis for incentives, including financial mechanisms, to conserve or restore these systems and avoid and manage emissions as well as impacts, i.e. support mitigation and adaptation to climate change.

This side event was organized by the Intergovernmental Oceanographic Commission (UNESCO-IOC), the International Union for Conservation of Nature, Conservation International, Indonesia, Costa Rica and Ecuador to provide timely information to delegates during the process. This event will be the occasion to discuss and present a number innovative tools building on the work of the Blue Carbon Policy Framework. Key questions that will be addressed in the framework of Rio+20 will also be discussed, such as:
In preparation for Rio+20, UNESCO-IOC, together with the United Nations Development Programme (UNDP), the International Maritime Organization (IMO) and the Food and Agriculture Organization of the United Nations (FAO), have prepared a Blueprint for Ocean and Coastal Sustainability. This paper provides a context for the Rio+20 discussions through analysis of current challenges in ocean and coastal management around the world. More importantly, it puts forward a concrete set of proposals and objectives to transition to a Blue-Green Economy. One of these proposals is the development of a global programme aimed at greater protection and restoration of vital ocean and coastal habitats, and of a global blue carbon market as a means of creating direct economic gain through habitat protection.
_______________________________________