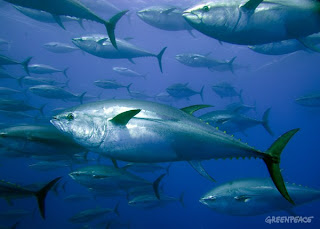 http://blogs.thesciencejobs.com/2010/12/where-overfishing-and-climate-change.html
Where overfishing and climate change meet
Sunday, December 5, 2010 Bryan Wallace, PhD
It is often said that to be responsible stewards of the oceans (or other natural systems), we need to be conscious of both what we take out and what we put in.
Among the myriad threats to the world’s oceans, overfishing is likely the most influential extractive activity, while influx of carbon-dioxide is disrupting basic ocean chemistry.
Are these two impacts related in any way? Have impacts of one exacerbated impacts of the other? What if we could kill these two birds with one stone?
To put a finer point on it, could all the biomass fished out of oceans be weakening the oceans’ collective abilities to soak up CO2 from the atmosphere and help to maintain global climate stability?
Some researchers think so. In a recent study entitled “The impact of whaling on the ocean carbon cycle: why bigger was better,” marine scientists estimated the total amount of carbon lost via global whaling activities targeting the baleen whales, the largest animals on the planet.
The idea is this: animal bodies are made of carbon, some of which comes from CO2 that is naturally absorbed by the ocean from the atmosphere. Bigger animals require more carbon, and thus are larger carbon ‘sinks’ than smaller animals. Larger populations of bigger animals, therefore, tie up even more carbon.
When these big animals die, they eventually sink through the abyss to the ocean floor, where incredibly diverse and largely unknown critters gorge on the rotting flesh that falls from above. This ‘marine snow’ is vital to benthic (i.e. ocean bottom) ecosystems, and the carbon transfers from tissues of dead animals to live ones – the ocean carbon cycle in action.
Harvesting marine animals breaks a crucial link in this process by removing important CO2 sponges that are sources for other marine animals. With these big sponges gone, ocean water has to absorb the carbon, thus speeding the ocean acidification process. So fishing could be making climate change impacts worse, especially when the biggest ocean animals with the most potential as carbon sinks are eliminated from the marine carbon cycle.
In addition to whales, what other animals that could play a key role in regulating the air-ocean carbon exchange are being reduced by human exploitation? Big ticket items like tuna, swordfish, and sharks serve enormous global consumptive demand, but are also among the ocean’s largest animals. This means that depletions in their numbers disrupt marine food webs and ecosystem function, but could also represent significant quantities of 'lost' carbon.
This could be another powerful argument in favor of sensible, science-based limits on exploitation of these big-bodied species. The big roles that healthy marine megafauna populations play in carbon storage might be just the creative thinking needed to more effectively mitigate impacts of human-induced climate change.
Posted by Steven J Lutz at 9:49 PM