Blue Carbon: The Role of Oceans (and Overfishing) in Climate Change

"...The Patagonian shelf absorbs about 17 million metric tons of carbon per year, equivalent to all the carbon contained in 100 thousand hectares of rain forest. The Patagonian shelf break is one of the most important fisheries regions on earth. Today most experiments agree that marine ecosystems are badly overfished and that at the present pace no fisheries are sustainable. A decrease in fish population could eventually affect zooplankton and phytoplankton communities thereby disrupted by (sic) the ability of the oceans to capture CO2. Such alterations of the marine ecosystem would be analogous to the impact of land use change on the continental carbon budget. These changes are still poorly understood and may bring with them unexpected surprises. Monitoring ocean productivity, carbon budgets and fisheries is important to understand options and interventions in the mitigation of greenhouse gas emissions."

_____________________________________
http://thinkprogress.org/romm/2011/12/09/385855/blue-carbon-oceans-in-climate-change/
Blue Carbon: The Role of Oceans in Climate Change
By Stephen Lacey on Dec 9, 2011 at 10:49 am
Oceans make up 70% of the earth’s surface and hold 90% of natural carbon. So why do they only make up a small portion of the research on the global impact of carbon emissions?
The role of “blue carbon” in climate change is getting more interest from the international community. With a growing body of research exploring how an increase in atmospheric carbon is impacting the chemistry and biology of ocean ecosystems — and thus influencing climate change — people are starting to pay more attention.
However, it’s still not a well-explored concept outside the scientific community. At the COP climate talks in Durban, for example, there is endless talk about atmospheric carbon and about how to control terrestrial carbon emissions through deforestation programs like REDD+. But there are still very few mentions of oceanic carbon.
“Hopefully, by exposing the science to higher level decision makers, we will bridge a gap of communication for that necessary understanding” of the role that oceans play in climate change, said Alberto Piola, an oceanographer with the Naval Hydrographic Service in Argentina, speaking at a side event on Blue Carbon at COP 17 this week.
We can look at Blue Carbon in two ways. The first is the climate change impact of releasing natural carbon from the oceans through the destruction of ecosystems. Most research in this area is focused on near-shore ecosystems like mangroves and sea grasses. The second is the impact of burning fossil fuels on ocean ecosystems by adding geologically-trapped CO2 to the carbon cycle.
Considering the immense shift already underway in the oceans, it’s amazing that the concept hasn’t gotten more attention in the international negotiations on addressing climate change.
In pre-industrial times, the ocean was a source of CO2, and the atmosphere was a sink. But the release of staggering amounts of geologic carbon has made the oceans a net sink.
We’ve reversed the natural carbon cycle in about 200 years.
How much carbon does it take to do that? Consider this: We burn 9.1 petagrams of fossil fuels per year. That’s the equivalent of a coal train wrapped around the world 63 times – or about 2.5 million kilometers. And that train is only growing.
“Now you get a sense of how much CO2 we add to the atmosphere,” said Chris Sabine, director of the Pacific Marine Environment Laboratory at the National Oceanic and Atmospheric Administration (NOAA), who outlined the numbers in a presentation.
“This pool of carbon should not be a natural part of the cycle on the time scales that we’re looking at. The terrestrial sinks and oceans are trying to take that up,” said Sabine.
Every day, we add 22 million metric tons of CO2 into the oceans. But our ability to accurately gauge the impact of those additions is still evolving.
“The models are very divergent at this point. We still need more data,” said Sabine. “We do know that resulting changes in chemistry and warming are expected to significantly impact ecosystems.”
The trends are certainly alarming. Alongside the dramatic reversal of the carbon cycle, we’ve seen a commensurate increase in the acidity of the oceans, greater fluctuations in temperatures, and an increase in oxygen depleted waters – a phenomenon known as hypoxia.
In more acidic conditions, organisms cannot use calcium carbonate for growing shells. Researchers have called acidification “a ticking time bomb” for ocean ecosystems and fisheries. And the combination of increased levels of CO2 and decreasing O2 levels can affect the temperature tolerance curve in organisms, making it harder for them to survive. The cascading impacts of these changes could be immense — but it’s still difficult to predict exactly how ocean ecosystems will respond, said Pedro Monteiro, the principal oceanographer with the Council for Scientific and Industrial Research, talking to Climate Progress.
In order to better predict how CO2 levels will influence oceans, Monteiro and his team are using O2 as a proxy. Because data sets for O2 are much longer than for CO2, researchers can examine the impact that fluxes in carbon and oxygen uptake have historically had on the oceans.
Until recently, research on blue carbon has been focused on how near-shore ecosystems can sequester carbon. But there’s increasing international coordination on projects looking at the role of the deep ocean. Monteiro calls the CO2 fluxes from the deep ocean “game changers” in how they influence oceanic chemistry and biology, and potentially release massive amounts of greenhouse gases back into the atmosphere.
“The exchanges are orders of magnitude larger,” explained Monteiro.”We’re trying to recognize all the different pools. What we’re seeing now is a shift from relatively small-scale regional studies to international research. And no single country can do them.”
Below is a film played at COP 17 on research in Argentina being conducted by Alberto Piola. The film was produced by the Inter-American Institute for Global Change Research:
_____________________________________
For additional information see IAI's press release for COP 17):
http://www.iai.int/index.php?option=com_content&view=article&id=122 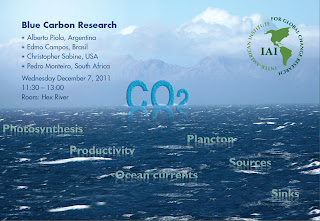 IAI Research at UNFCCC
The IAI hosted a side-event during COP-17 in on “Blue carbon research: biological, physical, chemical processes in oceanic carbon sinks and sources”. Based on IAI research in the , we discussed how ocean circulation affects blue carbon: the links between biological carbon sequestration, chemical absorption, physical transport and possible re-release to the atmosphere; and what this implies for carbon management options

"...Overfishing disrupts the marine ecosystem’s food web and can affect the capture of carbon through phytoplankton photosynthesis..."