Mangrove forests, seagrass beds and salt marshes possess a huge carbon storage capacity, which scientists say can be used to mitigate climate change. Known as blue carbon, this resource could one day be quantified and sold on international carbon trading markets. 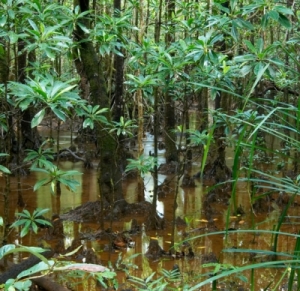 Together with seagrass beds and salt marshes, mangrove forests such as the one pictured account for 70% of the ocean's carbon storage capacity.

Mangrove forests, seagrass beds and salt marshes cover only around 0.5% of the seabed, but account for some 70% of the ocean's carbon storage capacity.

These three marine environments soak up and store carbon dioxide in their biomass and sediments, where they keep it locked up for centuries. Together with the carbon held in the rest of the ocean, this is known as 'blue carbon'.

Blue carbon is also the name of a new strategic approach to make use of the large carbon capture and storage potential of coastal ecosystems. If this carbon could be quantified and sold on international carbon trading markets, this could help fund preservation and restoration projects, which would also help capture more carbon and ease the effects of climate change.

Apart from sequestering carbon quicker than the same area of rainforests can, these three ecosystems provide other 'eco-services' which are especially valuable for vulnerable coastal communities in developing countries. These include food and energy, protecting shorelines from flood and tsunamis, filtering water, as well as recreation and tourism.

But aquaculture, agricultural development and pollution are now responsible for loss of these ecosystems at a rate of up to four times that of rainforest loss. Around 20% of mangroves and more than 50% of seagrass ecosystems have been lost in the last 25 years, and salt marshes are being lost at a rate 1 to 2% per year.

"Some of the coastal ecosystems are 50 or even up to 75 times more efficient than a same type of area of land in terms of sequestering carbon, and that's a wonderful opportunity for us, but it's one we're squandering," says Carl Gustaf Lundin, director of the Global Marine and Polar Programme at the International Union for Conservation of Nature (IUCN) based in Switzerland. "We're doing a lot silly things in the ocean, we're doing land reclamation projects, we're doing very destructive things in the marine environment and if we stop those and actually start restoring, then we'll at least help our carbon footprint."

Last month, a new research initiative was launched at the Eye on Earth summit in Abu Dhabi, United Arab Emirates to understand how the blue carbon strategy would work. This will feed into the negotiations for the U.N. Conference on Sustainable Development Rio+20 in Brazil later this year.

According to the organisations driving it, Conservation International, IUCN and UNESCO, this is the first global initiative to mitigate climate change through the conservation and restoration of coastal marine ecosystems. "Blue carbon is an opportunity or us, first to take into account what we as humans are doing to the environment, [and] an opportunity for us to be able to factor those resources and in turn use this as a platform for solutions," Rolph Payet, special adviser to the president of the Republic of Seychelles, an island country in the Indian Ocean, and president of University of Seychelles, told the summit.

Blue carbon aims to link eco-services, including but not exclusively carbon storage, with market-based payment mechanisms to help mitigate and adapt to climate change, conserve biodiversity, and ensure sustainable delivery of those ecosystem services to people.

But one of the key problems with linking economics of blue carbon trading with marine conservation is a lack of comparable baseline data on blue carbon. This 'data deficiency' is a key barrier to effective planning and decision-making in the coastal and marine environment, according to a white paper prepared for the summit. It also hampers the inclusion of these environments into international conventions and financing mechanisms that exist for land habitats, such as forests through the U.N.'s Programme on Reducing Emissions from Deforestation and Forest Degradation in Developing Countries (REDD).
"There's a big gap right now with basic data," says Sylvia Earle, founder and chairman of the National Geographic Society in the U.S. "You can't put a finger on it [the problem] until you know what you've got, but that's no excuse to ignore it, and we had been ignoring it."

Lundin agrees, "We're just getting started in the accounting process, in trying to understand the science behind it and, from then on, trying to find policy options."

There are no internationally accepted methodologies for assessing carbon sequestration by salt marshes, sea grasses and 'below-ground' parts of mangroves. And there is still uncertainty about the exact sequestration rates for the three ecosystems.

"The key is knowing. It's identifying problems. You can't really solve a problem until you know you've got one," Earle says. And according to her, the whole of the ocean is a large part of the environmental data gap problem, which was, together with sharing existing data, the focus of the summit in Abu Dhabi.

And the problem is especially acute in developing countries. In his message to the summit, the prime minister of Kiribati, an island nation located in the central tropical Pacific Ocean, H.E. Beretitenti Anote Tong said, "For us in small, developing countries and indeed for most of the Pacific island countries ... environmental information is a scarce commodity. Even where such information does exist, it is often of limited value because of its poor quality."

So, the working group on blue carbon, brought together by the summit, will start developing new scientific methodologies and start filling the data gaps. This will include a US$4.5 million Global Environment Facility (GEF)-funded research project due to start late this year, and new Intergovernmental Panel on Climate Change (IPCC) guidelines on greenhouse gas inventories, to be launched in 2013, that would include blue carbon.

It will also help bring together existing initiatives and pilot projects currently taking place in the Asia Pacific region, West Africa and Arabian Peninsula. One goal is to develop an interactive global map of blue carbon projects to build a network of practitioners and experts and to gather the lessons learned.

Another is to use citizen science to help map habitats and later provide data openly online. "We need more practical examples, we need to link science and knowledge with the practical application," says Lundin.

The blue carbon initiative, which has its origins in two reports published in 2009, already claims a success in getting the issue into the public domain and raising awareness of the importance of blue carbon. If all goes well, in the next three to five years they hope to have examples of new data being used in practical decision-making, demonstrate the value of coastal systems to carbon markets, identify a global set of priority areas for conservation, and develop a policy framework easing payment for ecosystem services.

And while for many in the West, blue carbon may be an opportunity to offset their carbon emissions, for small island states in the Pacific and Caribbean it may be a matter of survival. "Our ocean is the source of our livelihood," Tong said. "For us, sustainable management of our ocean is matter of survival for our Pacific peoples."
Posted by Sven Stadtmann at 4:21 AM