Government officials in Tanzania are concerned about the intrusion and increasing demand for fresh plots as local farmers are driven to new areas as increasing levels of salt water is pushed inland. They claim that the random forest clearing carried out by some farmers is harming the conservation of local biodiversity. 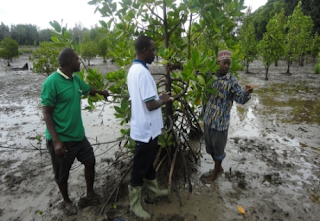 RUFIJI, Tanzania (AlertNet) - Thousands of farmers in Tanzania’s Rufiji Delta have been accused of destroying mangroves as they search for new land to grow their rice crops, which are being damaged by salt-water intrusion.

The salt water, pushed inland by surging tides from the Indian Ocean, is damaging fields of rice seedlings. Farmers in several villages in the river basin, which sprawls across the east African nation’s southern half, have seen yields fall as a result.

With thousands of hectares affected by saline intrusion, it is becoming harder for the inhabitants of Salale ward to earn a living from rice cultivation, which has been the mainstay of the local economy.

“It is the poor who suffer,” said Henri Laswai, an agricultural expert at Sokoine University in Morogogo. He attributed the problem to worsening climate change impacts.

Scientists have linked the growing problem of saltwater intrusion at least partially with climate change, as sea levels rise. Higher seas inundate wetlands and other low-lying lands, intensify flooding, and increase the salinity of rivers and groundwater tables, according to the U.S. Environmental Protection Agency.

In the Rufiji Delta, farmers have been moving away from the increasingly salty rivers, where most paddy fields are located, further out into the delta in search of fresh water and better land. But some are encroaching on protected mangrove swamps in their search for new, fertile fields.

The scramble for land has created conflict between Rufiji residents and government authorities who want to stop local people invading protected sites.

Saline intrusion has forced farmers in Nyamisati village in Salale ward, around 250 km from Dar es Salaam, to move to areas such as Bunga and Mchinga where the soil is still very fertile.

YIELDS DOWN A THIRD

“We have experienced one of the lowest crop yields in our history this year. Imagine - one hectare hardly gives you 20 bags of rice these days, whereas we used to get up to 30 bags of rice before,” said 76-year-old Swaleh Jongo, a farmer in Nyamisati. “This is caused by non other than salt water, which is harming our crops.”

The situation has forced farmers to clear some mangrove trees in the delta to find uncontaminated land where they can plant rice seedlings, according to Jongo.

“If we don’t do this, how do you think we are going to feed our families?” he asked.

Most households in Salale that have relocated their fields have to travel long distances to the new paddy fields they have carved out of the mangrove forest. As a result, they often build temporary accommodation in which they stay during the main farming season.

Government officials are concerned about the intrusion and increasing demand for fresh plots, saying that random forest clearing by farmers is harming the conservation of local biodiversity. Such clearing also contributes to climate-changing carbon emissions, releasing carbon stored in forests.

In the past two to three decades, over 5,000 hectares of Rufiji mangrove forest have been lost to rice cultivation, according to a recent remote-sensing study conducted by environmental group World Wildlife Fund (WWF) in collaboration with Sokoine University.

“We are trying to educate Rufiji dwellers on the need to protect the forest around them - that is why we encourage them to replant mangrove trees in their paddy fields,” said Zacharia Kitale of the donor-funded Mangrove Management Project (MMP), run by the Ministry of Tourism and Natural Resources.

Last October, the MMP conducted a five-day eviction exercise in a bid to protect the mangrove forests from further destruction due to increasing human activity.

The decision to remove paddy farmers from protected land in the mangrove forests caused an uproar. Villagers whose temporary huts were set ablaze argued that they and their ancestors had used and at times lived in the forest for generations.

The row has cast questions over plans to support community management of the region’s mangrove forests under the U.N.-backed Reducing Emissions from Deforestation and Degradation (REDD+) scheme, which would link forest protection efforts with global carbon markets.

In November, WWF’s marine and climate change advisor, Jason Rubens, told Tanzania’s Business Standard newspaper that the land controversy could hamper such work in the Rufiji Delta as communities might suspect that any mangrove management initiative is part of a strategy to evict them from the delta.

Many farmers seem oblivious of the 2002 Forest Act that prohibits human activities in protected forests, including Rufiji, parts of which form an internationally recognised reserve. But other farmers say they follow the restrictions and are not contravening the rules.

Saidi Ali, who has a 10-hectare (25 acre) farm in the delta, defends the decision by local people to cultivate rice in unprotected forest zones.

“We respect the government,” he said. “That is why no one has dared to touch those areas we traditionally know are protected forests, like Kikale and Msindaji. But (that does not include) the whole of Rufiji.”

Changing weather patterns – including reduced rainfall in higher altitude zones - are also shrinking the area of the delta land suitable for cultivation, according to Ali. Paje, Ngazini and other higher-altitude locations, he said, had been traditional rice-growing places for centuries until recent decades.

“These days nobody goes there because when you plant rice, seedlings die from shortage of water and poor soils,” he said.

The situation is likely to get worse. Officials from the state-run Rufiji Basin Development Authority (RUBADA) expect salt-water intrusion to damage more land in the valley.

“We have done many studies, and they have proved that this problem will certainly spread, threatening our food security,” explained its chief executive Aloyce Masanja.

More than 90 percent of households in the Rufiji Delta and its floodplain - which have a combined population of more than 150,000 - make their living from rice farming.

They supplement their income with fishing and extraction of wetland products, such as weeds for making baskets. But in the past decade, population growth and unsustainable resource use, including cutting down trees for fuel wood and charcoal, is putting these activities at risk too.

Villagers fear their dwindling rice yields, coupled with government disruption of their forest farming activities, will force many to depend on food handouts this season.

“We invested massively in rice, but because of salt water, our fields are turning red,” said Jummanne Mwalekwa, a farmer in Nyamisati. “We can barely see the salt content in the soil, yet there is nothing we can do but to vacate the fields... Now the government says we have invaded its forests. Where can we go?”

Since the furore over the evictions, the government has eased its law enforcement efforts - at least for the time being - and is allowing farmers in the mangrove forests to continue their activities while it collects more data on their environmental impact.

MMP director Zawadi Mbwambo is hopeful that preliminary studies for forest protection projects will continue after the dispute is sorted out - especially given that the Norwegian government has already injected around $5 million to support local efforts to tackle climate change.

Kizito Makoye is a journalist based in Dar es Salaam, Tanzania. This story is part of a series supported by the Climate and Development Knowledge Network.
Posted by Sven Stadtmann at 8:05 AM