Scientists have found that mangrove destruction as a result of shrimp farming have major impacts on carbon sequestration in these habitats. 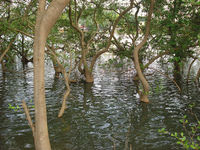 In many parts of Latin America and Asia, large swaths of coastal mangrove forests have been cut down and turned into shrimp farms. Not only does this deforestation destroy habitat for birds and cause other ecological problems, but it also releases a large amount of the carbon stored in mangrove soil—so much, in fact, that the shrimp end up having a sizable carbon footprint, according to calculations presented here today at the annual meeting of the American Association for the Advancement of Science (which publishes ScienceNOW).
To get a handle on how much carbon dioxide is represented by shrimp, ecologist Boone Kauffman of Oregon State University in Corvallis made some estimates based on typical shrimp farms in southeast Asia. He looked at farms that are relatively large and not particularly productive, with harvests yielding 50 to 500 kilograms of shrimp per hectare. These farms, which make up about half of those in the world, only last for 5 years or so before the buildup of sludge in the ponds and the acid sulfate soil renders them unfit for shrimp. “It's the equivalent of slash-and-burn agriculture,” Kauffman said. (Other types of shrimp farms are more efficient and not located in mangrove forests.)
Drawing on other studies, Kauffman estimated that 401 metric tons of carbon are emitted to the atmosphere when a hectare of mangrove is converted to a shrimp farm, which is equivalent to 1472 tons of carbon dioxide. Over the average 5-year life span of a farm, a farmer will typically harvest about 1659 kilograms of shrimp. So a 100-gram shrimp cocktail represents an “astonishing” 198 kilograms of carbon dioxide from the loss of the mangrove, Kauffman said, the equivalent of burning 90 liters of gasoline. The carbon intensity of shrimp from deforested mangroves is 10 times greater than that of beef grown in deforested Amazonian rain forest, according to other unpublished calculations Kauffman has made. The calculations don't include the energy involved in feeding, processing, and transporting the shrimp.
“The shrimp cocktail is a good example of how carbon cost associated with mangrove degradation way outweighs the actual product that is produced,” Emily Pidgeon of Conservation International told the audience at a session entitled “Blue Carbon, Green Opportunities: Innovative Solutions To Protect Coastal Ecosystems.” So, how much would it cost to prevent mangroves from being turned into shrimp farms? Based on his calculations, Kauffman says that compensating farmers for not growing shrimp would mean that each ton of carbon kept intact in mangrove soil would cost about $4.50. “That's well within the range of carbon markets,” Kauffman said.
At the moment, these carbon markets only trade in credits for terrestrial ecosystems; for example, keeping a certain amount of forest intact in order to offset a ton of carbon dioxide emitted by burning fossil fuels. At the session, Carolyn Ching of the VCS Association—a firm that creates accounting standards for carbon credits—described progress in devising the first carbon credit program for mangroves and other wetlands, which could provide funds for their conservation and restoration. Ching suggested the system could be finalized and running as early as September: “We see carbon finance as one of the potential mechanisms for addressing wetlands conservation.”

Mr. Chamberlain from GAA argues that "while the Global Aquaculture Alliance supports Mr Kauffman's valuation of mangroves as important ecological carbon sinks that should be conserved, we take issue with his calculations about shrimp farming" arguing that the life span of shrimp farms are usually longer than what is suggested by Kauffman, moreover, that over time shrimp farms become less problematic as acid gradually neutralizes.