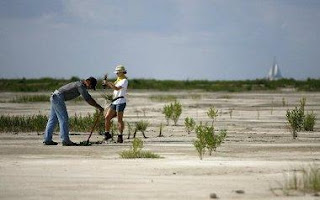 A team of Louisiana scientists is laying the groundwork for creating a new carbon storage industry that could both reduce the effects of global warming and rebuild wetlands along the state’s coastline. Sarah Mack, founder of New Orleans-based Tierra Resources, and Louisiana State University wetlands scientists John W. Day and Robert Lane have come up with a method for measuring the molecules of carbon removed from the atmosphere by the soils and plants that are created with coastal restoration projects.

Removing carbon dioxide and other greenhouse gases from the atmosphere is a key strategy for mitigating global warming, and thus reducing the effects of climate change. Scientists say rising levels of human-made carbon dioxide help the atmosphere hold in heat, leading to warmer worldwide temperatures. Those temperatures, scientists say, will result in a variety of harmful effects, from rising sea levels to longer periods of drought and more intense storms.

Assuring that restoration projects can store carbon for years could turn the projects into major investment targets for carbon-producing industries nationwide, including electric power generating companies and petrochemical plants that are facing potential federal and state rules aimed at reducing carbon emissions.

“You either eat less or you exercise,” she said.

But scientists don’t have it easy, she said. Restoration projects don’t create big chunks of coal that are easy to count. Instead, they have to measure the amount of carbon absorbed as plants grow, and then how much remains in wetland soils after the plants die and decompose.

The process must also take into account whether the effects of global warming, including sea level rise, might in the future upset the process, with the wetlands sinking below the water and freeing the carbon to again enter the atmosphere.

The American Carbon Registry, created to certify carbon credits, is now reviewing the Tierra Resources method to assure it meets such standards.

Industries such as New Orleans-based Entergy Corp. have been investing in carbon-reduction projects for almost a decade, “banking” the credits in anticipation of federal regulations aimed at reducing industrial carbon emissions to 1990 levels.

Entergy, which operates electric utilities in Louisiana, Texas, Arkansas and Mississippi and owns electrical plants in several other states, is paying for development of the Tierra Resources wetlands carbon offset methodology, in part because of the threat to the company’s future by climate change, a company official said. A 2010 study co-sponsored by Entergy and America’s Energy Coast found that the effects of climate change could result in an annual economic loss to the Gulf coast of $350 billion.

Development of privately financed carbon sequestration projects also is being promoted by the state as part of its $50 billion, 50-year coastal restoration and protection master plan.

The Environmental Protection Agency agreed in 2010 to regulate greenhouse gas emissions from fossil fuel-fired power plants and petroleum refineries, which together make up about 40 percent of the nation’s emissions. It’s unclear when those regulations will be completed or enforced, but the voluntary market continues to expand.

And California, which would rank on its own as the 12th-largest producer of greenhouse gases in the world, is about to launch its own carbon reduction program by the end of next year that’s aimed at cutting greenhouse emissions to 1990 levels by 2020, or about 25 percent below today’s levels.

Assuring that the carbon credits are valid has remained a concern, though, both for the industries paying for projects to establish the carbon reductions, and for the voluntary associations and governments enforcing the reductions.

The Chicago Climate Exchange, established in 2003 to create a financial market for carbon trading, updated its rules last year to require the carbon offset credits be certified under approved science-based protocols.

Posted by Sven Stadtmann at 9:29 AM